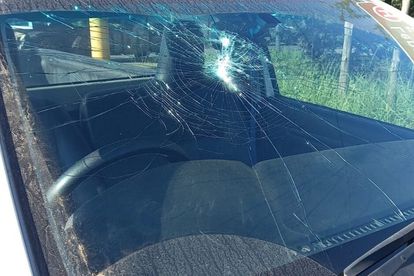 The suspect threw a rock that smashed a motorist’s windscreen on Thursday morning. Photograph: Marshall Security

The suspect threw a rock that smashed a motorist’s windscreen on Thursday morning. Photograph: Marshall Security

A suspect who was allegedly throwing rocks at vehicles from the Queen Nandi Drive bridge onto vehicles on the N2 freeway North of Durban was arrested by a local armed response officer on Thursday morning.

Marshall Security reported in a Facebook post that the firm’s Emergency Dispatch Centre had received a call from a client regarding a rock throwing incident in Queen Nandi Drive at around 9.15 am on Thursday morning.

She reported to the dispatch centre officer that her husband had been  a victim of a rock throwing incident on Queen Nandi Drive. Motorists had also earlier reported on social media that the suspect was allegedly throwing rocks from the bridge onto traffic on the N2 freeway below.

“Upon arrival, our armed reaction officer noticed a suspect fitting the description that was given by the complainant, running on Queen Nandi Drive, and requested for back up,” Marshall Security said.

“Additional officers were dispatched to assist and a foot chase ensued, which subsequently led to the suspect being apprehended.  After apprehending the suspect, other motorists arrived on the scene and claimed that they were also victims of rock throwing and positively identified the same suspect for damaging their vehicles,” Marshall Security said.

Greenwood Park SAPS arrived shortly thereafter and arrested the suspect who will be charged for malicious damage to property, the security company added.

Meanwhile, the act of ‘spiking’ has become an increasingly troublesome issue in some parts of South Africa, as thugs target motorists on busy highways late at night. This week, a local Community Policing Forum (CPF) published the first guide to local hot-spots – where this crime occurs most often –  to help South Africans avoid a traumatic experience.

This new criminal trend sees spikes hidden in the road, with the express intention of bursting tyres and slowing cars down to rob the occupants. This behaviour is also supported by other petty crimes, such as rock-throwing and the placement of stones or ‘significant debris’ on the road. Both the N4 and N1 have been ‘significantly affected’.