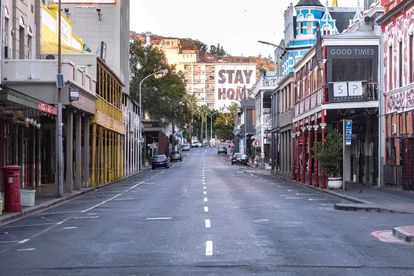 A total of 14 people were arrested for robbery over the weekend in Cape Town after several businesses in the city centre were targeted. This comes during a nationwide lockdown when all businesses are either closed or operating from home.

Hendricks said the biggest arrest took place on Sunday 29 March at 10:35 where seven suspects were arrested for breaking into Liny’s Baby Shop on the corner of Plein and Strand streets near Cape Town Station.

Three suspects were also arrested on Sunday for breaking into Revelas Fisheries in Long Street. Another two suspects were arrested for other business break-ins on the corner of Buitengracht and Wale streets.

The most dramatic arrest took place on Saturday 28 March when three suspects were spotted by a CCID public safety officer inside the alley next to Bob’s Bar in Constitution Street.

CCID night manager TJ Jenkins said that three suspects disappeared inside the premises, and the steel door was closed from the inside. Two of them then tried to escape by jumping from the top of the door but they were apprehended by CCID officers. The third suspect was thought to have remained inside the building during the robbery.

“When I arrived on the scene at 18:45, I requested assistance from SAPS, and informed the business owners of Harrington’s and Bob’s Bar respectively of the incident, so that we could search for the third suspect inside their premises,” said Jenkins.

It was then discovered that alcohol to the value of R9 000 had been stolen from Bob’s Bar during a quiet lockdown.

“The third suspect was never found. We believe he escaped over the rooftops and jumped down into Canterbury Street. The other suspects were arrested, and cases of theft [were] opened against them,” added Jenkins.

Two suspects were also arrested for being in the possession of implements used to break into cars.

“We will not tolerate criminal activity in the CBD during the lockdown while our nation is trying to combat the coronavirus crisis. Criminals need to know that they will be caught and brought to book: we have 300 public safety officers working shifts 24/7, and they have been briefed and know what to look out for,” said Hendricks.