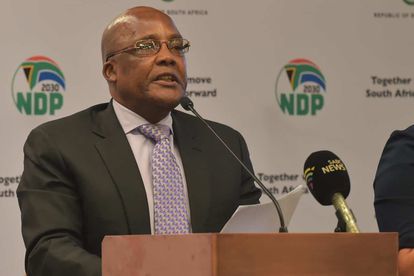 Minister Aaron Motsoaledi acknowledged that the high number of confirmed cases are “unnerving everbody” in the country, but urged South Africans to refrain from spreading fake news online, as it’s a criminal offence.

He highlighted two incidents: One case regarding Chinese nationals at the Mozambique border; another pertaining to Japanese citizens who were escorted to OR Tambo International Airport.

Both incidents were misrepresented online, with several netizens sharing unrelated images of the border post between Mozambique and South Africa.

According to the fake news accounts, Chinese nationals who were turned away from OR Tambo International Airport tried to gain entry into South Africa by bribing officials at the border post. However, Motsoaledi said:

“Social media was awash with pictures of supposed Chinese nationals at the Lebombo border post on Mozambique’s side. […] I want to state categorically that the pictures were not from the Ressano Garcia or Lebombo posts.”

Motsoaledi said a senior official stationed at Lembobo was contacted to verify the claims. “He confirmed that this was not his area,” Motsoaledi said during the press briefing in Pretoria.

He explained that officials who investigated the claim “could clearly tell the difference between” the images shared on social media and the border post. Motsoaledi added:

“You have been told that fake news is a criminal offence. Now here is someone who is calling our country a banana republic, when the person knows that the picture is photoshopped.”

According to Motsoaledi, an aircraft carrying 150 people landed at OR Tambo International Airport on Friday, 20 March. South African students on board were allowed to disembark and are currently in quarantine in Ekurhuleni.

Chinese passengers on the plane were refused entry, but Motsoaledi highlighted that the 70 passengers from China could not have gone to Mozambique because the borders were already closed.

Instead, they were instructed to return to China. The plane departed from OR Tambo International Airport at 15:01, on Friday 20 March. They arrived in Beijing on Sunday, as confirmed by air traffic controllers.

“By some magic, they are back in Mozambique buying their way out through corrupt officials. I want to state that fake news tends to be more dangerous than the virus itself because it worries people.

Due to this, and knowing the original source of the pictures, Motsoaledi instructed his team to lay a charge with police. Three individuals have already been identified.

“This is the first test case of whether people posting fake news can be charged or not. We are going to charge these ones.”

The second incident was “very unfortunate,” according to Motsoaledi, and likely driven by the first incident of the Lebombo border posts.

Japanese nationals on their way from Mozambique to OR Tambo International Airport were stopped at eNtokozweni (Machadodorp). Employees of the Japanese Cooperation Agency, 24 in total, were accosted by police.

Police didn’t allow them entry, and Motsoaledi said he commended them for strictly adhering to the guidelines. However, when the situation was explained to authorities, the 24 individuals were allowed to pass.

He explained that the Japanese embassy provided profiles of all 24 employees, and that the individuals were screened against the information received.

They have been stationed in Mozambique since May 2019, and according to Motsoaledi, never left the country. Their contracts would have expired in May 2020. Motsoaledi went on:

“On 20 March, the embassy of Japan asked for assistance from SA, to facilitate their transit through OR Tambo International Airport. Because Japan isn’t on the list of high-risk countries, the request was approved.

The group left for Japan on 23 March 2020, and air traffic controllers confirmed that the plane landed in Japan.