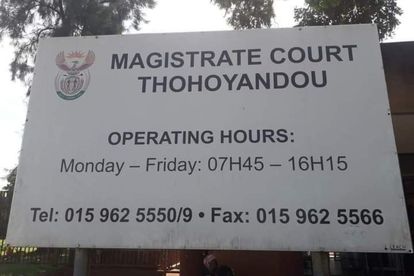 Ndivhuwo Tshishikhawe has been sentenced to eight life terms and 100 years behind bars for rape, robbery and kidnapping. Photo: @VhembeO / Twitter

Ndivhuwo Tshishikhawe has been sentenced to eight life terms and 100 years behind bars for rape, robbery and kidnapping. Photo: @VhembeO / Twitter

Ndivhuwo Tshishikhawe, a Limpopo serial rapist, was sentenced to eight life terms and 100 years behind bars.

He pleaded not guilty to the crimes. State Advocate Nduvheni Mulangaphuma requested that the court impose a life sentence on the accused during the aggravation of sentence.

Tshisikhawe ‘terrorised’ four villages between 2015 and 2017

Limpopo National Prosecuting Authority (NPA) spokesperson Mashudu Malabi-Dzhangi said that Tshisikhawe entered the homes of his victims and threatened them with a knife before robbing them.

“He would enter the homestead of the victims, threaten the victims with a knife, and rob them of money, bank cards and cellphones,”

TimesLIVE reports that Tshisikhawe was arrested in July 2017 but escaped from custody. He was rearrested three weeks later.

Meanwhile, it was previously reported that Sbongiseni Njabulo Ngwenya (24) was sentenced to five life terms for rape and 300 years in jail for other serious crimes he had committed. The High Court of South Africa; North West Division, sitting at the Ga-Rankuwa Regional Court sentenced Ngwenya on Thursday 26 May.

Ngwenya was sentenced to five life terms for rape and a cumulative 300 years, for other serious offences that include other rape offences, housebreaking and robbery with aggravating circumstances.

He was found guilty on 39 counts, of which 16 were for rape, nine for armed robbery, 13 for housebreaking and one for attempted murder. Ngwenya was arrested in September 2018, following a series of crimes reported to the police, by his victims. Read the full story here.