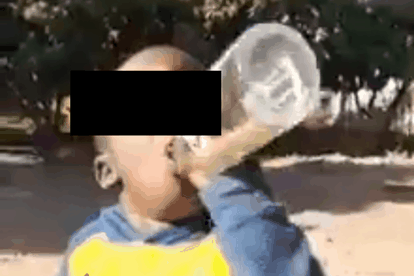 A young mother and her teenage accomplice both appeared in the Dzanani Magistrate’s Court this morning after they were arrested for forcing her two-year-old child to drink alcohol and smoke dagga. The incident – which went viral in a clip posted to social media – occurred in Limpopo’s Rabali village, near Mphephu.

The shocking video shows the mom putting a lit dagga cigarette inside her son’s mouth. She then proceeds to blow smoke in his face. The abuse doesn’t end there, as the toddler can be seen carrying two bottles of alcohol while he is being willed to drink it by both older parties. We cannot show the clip, as it will identify the youngster – but these screengrabs highlight the utter lunacy of what went off:

Limpopo police confirm child is now ‘living with other family’

We’ve been given an update from SAPS, confirming a few more details following their court appearance:

Meanwhile, Brigadier Motlafela Mojapelo of Limpopo SAPS has reacted with disdain to this regrettable incident, strongly condemning the mother’s actions and motives:

“The suspects were arrested on Saturday, 18 July 2020 soon after the police accessed the video clips that went viral on social media, showing the woman giving her son dagga to smoke and alcohol to consume. Her accomplice can be heard in the background persuading the little boy to indulge.”

“The mother was arrested at Rabali village and her accomplice at Dzanani under Siloam policing area. The Commissioner of the South African Police Service in Limpopo Lieutenant General Nneke Ledwaba has strongly condemned the actions of the two women and has commended the police for their swift response.”