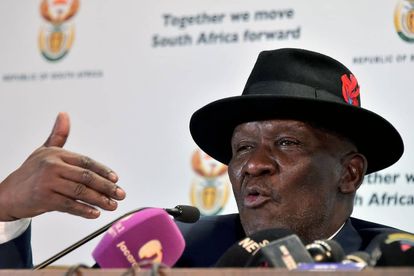 On Tuesday 22 September, Police Minister Bheki Cele together with SAPS management, briefed the media on law enforcement during Level 1 lockdown. While Cele also provided further details on Gender-based Violence and Femicide (GBVF) hotspot areas, he said police will continue to enforce the curfew, which now takes place from midnight to 4:00.

Cele said this past weekend he joined police operations in Ekurhuleni, Gauteng. During the multi-disciplinary operations between SAPS, SANDF and provincial traffic law enforcement, they came across several shebeens and taverns operating way past the stipulated 22:00 curfew under Level 2 lockdown.

“I want to express my shock and disgust about the blatant disregard of the health of our people by some liquor outlet owners. I am talking about businesses that choose to flout the rules in the name of profit,” said Cele.

Cele said curfew will, therefore, still be enforced by police despite the change in hours.

“South Africa may be on the lowest alert level of the National Lockdown but law enforcement, on the other hand, will remain on the high alert,” said Cele.

On Wednesday 16 September President Cyril Ramaphosa took to the podium to address the nation. While he announced a long-awaited nationwide move to Level 1 lockdown, he too announced the easing of certain restrictions. One of the restrictions that was eased was the curfew. He said that from midnight Sunday 20 September, the curfew would be between 12:00 and 4:00.

Despite an eased curfew, Mzansi and political parties were not impressed. The DA said there shouldn’t be a curfew in existence, to begin with.

WHY IS IT STILL IN PLACE?

DA Shadow Minister of Cooperative Governance and Traditional Affairs Haniff Hoosen called on Cogta Minister Nkosazana Dlamini-Zuma to explain the reason for the curfew, basing it on clear scientific evidence. While we’re not sure she made use of scientific evidence, she did on Friday, explain why there is still a curfew in place.

During a Level 1 media briefing, she said government does not want “chaos” to continue right into the morning.

“We want people to at least have a time frame where they know now they have to leave that venue and go home,” she said.

“They had to be home by 22:00 but now it has increased, they have to be home by midnight so you can see its a gradual opening so that we don’t do it in a bang and find that there are unforeseen problems like we have learnt in the past,” she said.

“We still have 2 000 or more new cases a day and we know that if people have been sitting in a tavern or restaurant, you don’t want people to sit there for hours and hours. People once they start drinking, getting drunk, they forget their mask, they forget social distancing, it becomes chaos,” she added.