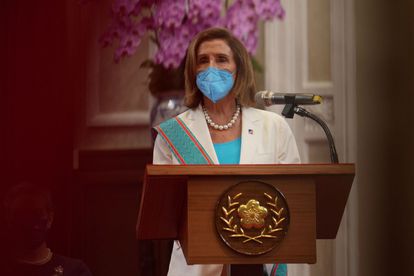 Nancy Pelosi, US Speaker of the House, left Taiwan after her one-day trip to the Island, reports Al-Jazeera. Her trip sparked much controversy from many parties from China to her own Democratic Party in the US.

There is much concern over the consequences of Pelosi’s visit to the island. Specifically, the concern is rooted in China’s militant response to her arrival in Taiwan.

Pelosi claims her visit to the island is making a statement about defending democracy on the global stage. In a piece she wrote for The Washington Post, she states the following:

“By traveling to Taiwan, we honor our commitment to democracy: reaffirming that the freedoms of Taiwan — and all democracies — must be respected.”

The piece came out after her arrival in Taiwan on Tuesday. The reason why the trip flared so many tensions is because of China’s displeasure with Pelosi’s presence in Taiwan, reports BBC.

For China, they believe Taiwan is a renegade province that will eventually rejoin the People’s Republic of China.

For Taiwan, they view their state as a sovereign nation even if their independence is not acknowledged by the Chinese government.

By travelling to the island, Pelosi makes a very strong remark about America’s stance on the whole matter. It means they are recognizing Taiwan as a nation.

Not only this, but Pelosi has made it explicitly clear that the US will defend the island should China pursue military action.

What does she leave behind?

During her trip, China also made their position very clear.

“These behaviours that go against the trend of times will not change the international consensus of one-China and will not change the historic trend that Taiwan will inevitably return to the motherland. Those who play with fire will not come to a good end, and those who offend China will be punished.”

Further, while Pelosi was on the island, China conducted military drills close to Taiwanese land. This was very clearly an act of intimidation and it left many worried for the consequences of Pelosi’s trip.

According to CNN, should China pursue military action it will be Taiwan who will suffer the most. This is despite America being the catalyst for any further aggravation.