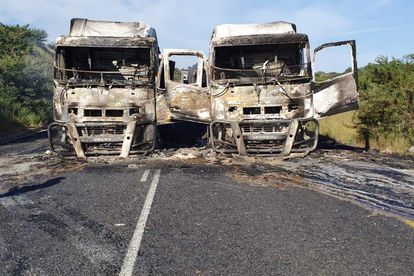 The town of Ladysmith in northern KwaZulu-Natal (KZN) has been brought to a standstill by violent protests as residents call for the head of their mayor, with KZN Premier Sihle Zikalala calling for criminals to be brought to justice.

Protests have been ongoing in the embattled town since late February, when residents gathered to call for the axing of Alfred Duma local municipality mayor Vincent Madlala, who is accused of corruption. They are also protesting against poor service delivery in the area and escalating violence within the local taxi associations.

Most businesses in the area have been closed down by a total shutdown, with roads leading in and out of the town barricaded by minibus taxis and protesters attacking vehicles.

Two trucks were torched on Monday 9 March, with three more scorched vehicles seen lying in the road in a video posted on Twitter.

“The situation is tense, with no public transport to and from Ladysmith. Two trucks were set alight yesterday. Public order police are on the ground and most of the roads are open,” she said.

28 arrests have been made for pubic violence in the town.

KZN Premier Sihle Zikalala, who visited the volatile scene on Tuesday with a delegation of provincial stakeholders has called for criminal “heads to roll”.

“Earlier this morning, we visited a site where we witnessed a total of about five trucks that were allegedly torched in the early hours of the morning on the R603 near Colenso, which resulted in the blockage of entry and exit points into the town,” he said.

“We have directed that the law enforcement agencies clamp down on lawlessness and ensure that heads must roll by the end of this week, after the torching of trucks and destruction of property.

“We must isolate genuine concerns of the community from criminal conduct.”

Zikalala said additional police officers had been arranged “to monitor the situation and ensure that the rights of businesses and communities are protected at all times”.

Zikalala said that the town’s local economy was on the brink of collapse with losses of more than R30 million a day resulting from businesses, factories and road closures.

“We are deeply concerned that the instability of the past weeks has led to the closure of factories and inflicted huge economic losses of more than R30m a day,”

“In addition, the present situation is compromising the future of workers as they are losing more than R2m a day in salaries.”

“We are deeply concerned to learn that normal day-to-day operations have ground to a halt with public transport brought to a standstill, resulting in some children missing schooling and businesses shutting their doors,” he said.

He said the he sympathises with the grievances of protesters, but will not stand for a violent reaction. He added that once the chaos has been controlled and it has subsided, the provincial governement would be able to attend to some of the protester’s concerns.

“We reiterate the point that everyone has the right to express their grievances without resorting to violence and acts that border on criminal behaviour.”

“We want to assure the community that the government will pull out all the stops to arrest the anarchy that has resulted in the shutdown of Ladysmith.”