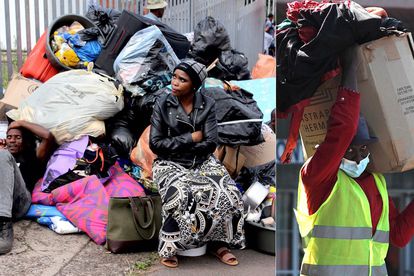 A number of people were evicted from the Montclair Lodge after they left the Yellowwood Park Civic Hall. Photo: Nqubeko Mbhele / Facebook

A number of people were evicted from the Montclair Lodge after they left the Yellowwood Park Civic Hall. Photo: Nqubeko Mbhele / Facebook

A group of KwaZulu-Natal (KZN) flood victims including women, the elderly and children were evicted from the Transnet building (Montclair Lodge) they had occupied for two weeks.

Out of 150 flood victims who have sought shelter in the Yellowwood Park Civic Hall, 100 moved out to stay at the Transnet hostel in Montclair.

Ward Councillor Gavin Hegter says other KZN flood victims from Umlazi joined these 100 people. Hegter explained that Transnet obtained an eviction order that was then executed by the Sheriff of the court with the help of the South African Police Service (SAPS).

The flood victims were evicted on Monday, 8 August. Hegter said he requested that the SAPS monitor where the people were going but was informed that they could not do so.

More than 100 flood victims arrived at the Yellowwood Park Civic Hall on Monday, 8 August, evening trying to move in. Hegter revealed that the people at the hall refused them entry. This resulted in a ‘tense standoff’ with many people sleeping outside the hall.

“This morning I managed to get officials to attend and an agreement was reached that only the previous occupants of the hall would be allowed back in. The Disaster Management unit took the others back to the areas that they had come from.

“It is really sad that the municipality is just not making any effort to resolve this ongoing problem,” said Hegter.

Previously, it was reported that the Democratic Alliance (DA) in KwaZulu-Natal (KZN) says it will be approaching the South African Human Rights Commission (SAHRC) regarding the living conditions of KZN flood victims.

The party noted a media briefing in April held by KZN Premier Sihle Zikalala where a promise to build over 4 000 Temporary Residential Units (TRUs) was made. The TRUs were supposed to be up and running in the week of the announcement in Ugu, Ilembe and eThekwini. Read the full story here.