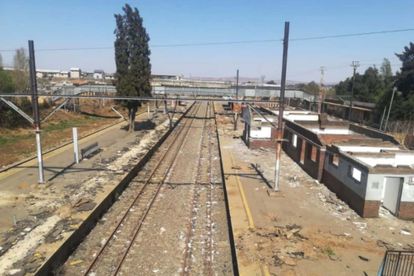 Transport Minister Fikile Mbalula has found himself in the hot seat yet again. While Mbalula has chosen to focus on alcohol restrictions in relation to drunk driving, he has been accused of overlooking the Kliptown train station which, according to images on social media and Prasa, has been stripped bare.

Mbalula, who took to the podium on Tuesday evening to discuss the latest directives for transport under lockdown Level 2, failed to mention anything about the Klipfontein rail infrastructure that is no longer there.

South African citizens have, however, not hesitated to remind him. Taking to social media, citizens have posted images of the Kliptown train station stating there is little to no infrastructure left after months of vandalism. Some have said that Mbalula is focusing on a renewed alcohol ban while there is no infrastructure for commuters. Prasa spokesperson Lillian Mofokeng verified the images saying that it is an accurate depiction of the station.

“While they busy focusing on alcohol ban Soweto Kliptown train station is being stripped down,” said one Twitter user.

Using the hashtag, “we miss Zuma,” another user said “this was not happening under President Zuma. Trains were running in full capacity”.

On Tuesday 25 August, Mbalula gave a fair share of good news and bad news. While four more airports can resume operation and an integrated security plan for Prasa will be announced, Mbalula made clear that international travel is still off-limits.

“Next week, we will announce an integrated security plan for Prasa. We will include other law agencies to make sure that Prasa and its passengers are protected,” he said.

Then he dropped a bomb. He said there would be zero tolerance for drunk drivers. This comes after three police officers were killed by a suspected drunk driver in a head-on collision on Sunday 23 August.

The new laws mean that an individual cannot drive if they register anything more than a 0% alcohol content in their blood.

Mbalula cited research by the Road Traffic Management Centre (RTMC) and South African Medical Research Council that suggests that drunk drivers who are involved in road accidents account for 27.1% of fatal crashes in the country.

“As indicated by this study and many observations including the recent death of TMPD officers, we need to strengthen the law and ensure that innocent lives are actually saved,” he said.