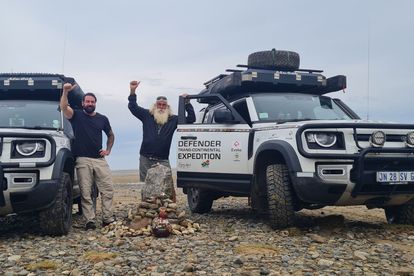 Pretoria, 17 August 2022: Nine months and close to 40,000km after setting out from Cape Agulhas on the southern tip of the African continent, Land Rover ambassador Kingsley Holgate and his humanitarian expedition team have successfully completed their objective of reaching the birthplace of Land Rover on the Isle of Anglesey in Wales.

Two years in the making, the Defender Transcontinental Expedition was the first to travel the entire length of Africa and Europe in recent years, and is the 40th geographic and humanitarian odyssey for the renowned explorer and his experienced team.

Kingsley and his team brought the epic journey to a ceremonial finish by driving their three expedition-kitted new Land Rover Defenders onto the beaches of Red Wharf Bay – the very place where the first Land Rover design was sketched in the sand by engineer Maurice Wilks in 1947.

To mark the occasion, a fleet of classic Land Rovers joined the three well-travelled New Defenders for the final stretch into Anglesey, while a group of Land Rover executives, friends of the brand and Holgate supporters were waiting to welcome the expedition team onto the sands where Land Rover was born 75 years ago. Finally, seawater collected from Africa’s southern tip where the Indian and Atlantic Oceans meet, was symbolically emptied onto the beach from the team’s iconic Zulu calabash which accompanies the Holgates on every trip.

As with all Holgate expeditions, this Defender Transcontinental Expedition was a journey of purpose. The six-member team conducted humanitarian work that assisted around 300,000 people along the expedition’s route through Africa where the mission focused on malaria prevention, working with Goodbye Malaria in Mozambique and assisting thousands of pregnant women and mothers with children under the age of five years in other countries where malaria is rife.

The Defender Transcontinental Expedition was also one of the first carbon-neutral expeditions in the world. Before leaving South Africa, the Holgate team joined forces with conservation groups in the Eastern Cape to plant 6,000 indigenous Albany Thicket trees to offset the expedition’s carbon footprint, as part of a large-scale wilderness restoration project. They also helped launch a One Million Tree-planting programme adjacent to Tanzania’s famed Serengeti.

“Add to that, uprisings across the breadth of North Africa meant that for the first time in decades, Africa was pretty much off-limits to overland travellers. We had to re-route to avoid certain areas and in doing so, we inadvertently became the first expedition in 30 years to cross Africa from south to north through the two Sudans.”

Reaching Europe, the expedition traversed Greece, North Macedonia and the Western Balkan countries of Kosovo and Serbia, including a re-route through Montenegro, to reach Hungary and Slovakia. Avoiding the war in Ukraine, the team took roads less travelled through eastern Poland close to the border with Belarus and into the Balkan states of Lithuania, Latvia and Estonia.

From there they crossed the Baltic Sea and traversed the length of Finland, before crossing into Norway and reaching the geographic waypoint of the most northern border point in Europe. Working south, the team then drove through Germany, Belgium and the Netherlands before crossing the Channel into the UK.

“We’re a team who delight in achieving geographic goals,” continued Ross. “The challenges of these past nine months were all the more worthwhile when our three Defenders finally reached the historic landmark at Red Wharf Bay.”

“What has been an overwhelming experience of this journey is how ordinary people in every country we’ve journeyed through, no matter their age, nationality, culture, race or religion, just want to live in peace,” concluded Kingsley. “The expedition’s Scroll of Peace and Goodwill is full of hundreds of heart-warming messages.

“That’s one of the best things about expanding your horizons through travel and adventure; it gives one hope for the future.”

Kingsley Holgate’s previous world-first expeditions include circumnavigating the world following the Tropic of Capricorn, a 449-day journey to track the outline of Africa through 33 countries, discovering the geographic centre-point of Africa deep in the rain forests of the Republic of Congo and being the first exploration team in history to reach all seven ‘extreme’ geographic points on the African continent.