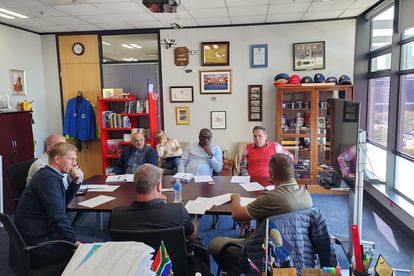 The City of Cape Town’s officials met with a consulting firm that specialises in kidnapping and extortion training on Friday, 9 September. Photo: JP Smith.

The City of Cape Town’s officials met with a consulting firm that specialises in kidnapping and extortion training on Friday, 9 September. Photo: JP Smith.

A Cape Town businessman was shot and killed in an alleged kidnapping attempt in Lansdowne on Friday morning, 8 September. The City of Cape Town said the country has a kidnapping crisis on its hands – referring to the latest crime statistics.

The incident occurred along Iman Haroon Road in Lansdowne. Witnesses claimed three unknown suspects attempted to kidnap the victim, Khalid Parker, however, the police said the motive for the shooting was unknown at this stage.

“The victim sustained a gunshot wound to his head and was declared deceased on the scene by medical personnel. Lansdowne police registered a murder case for investigation,” said police spokesperson Sergeant Wesley Twigg.

City of Cape Town Mayoral Committee (MayCo) Member for Safety, JP Smith, said they received word about the fatal kidnapping-gone-wrong and as it happens, the City had a meeting scheduled with an international consulting group that specialises in kidnapping and extortion training on the same day.

“Instead of waiting for the national government and Minister Bheki Cele to find a solution, we are exploring ways in which the City can become better equipped to protect our citizens in this regard,” said Smith.

The consulting group reportedly told Smith and senior City officials that kidnapping syndicates zero in on individuals with quick access to cash.

Once identified, the potential targets are monitored and their “pressure points” are identified, usually via social media.

“’The proud parent who poses at the front gates of their child’s first day at school’ gives them all the info needed. What school, where, when. And the info is freely available online,” said Smith.

Social media is the “number one tool” for organised criminals, he said, and encouraged members of the public to review their social media privacy settings and limit the audience to a trusted few.