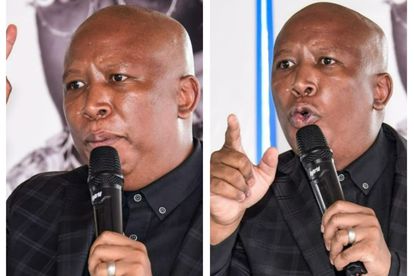 The funeral of the late Oupa “DJ Sumbody” Sefako was held on Saturday, 26 November at Ga Masemola, Limpopo and Julius Malema was in attendance.

Speaking at the funeral, the Economic Freedom Fighters CIC Julius Malema said that shootings are becoming more common in Pretoria, yet no one is held responsible.

According to EWN, he also said, “people of Pretoria don’t respect a black life. To them a black life does not matter”. Malema urged the police to prioritise DJ Sumbody’s case.

Julius said that people from Pretoria have guns in their homes and kill each other daily.

He said DJ Sumbody was killed more than 45 bullets and he could not defend himself because he was not armed when he attacked.

Julius went on to say that the person who killed him is a coward which is why he killed him at night when everyone was sleeping.

The EFF founder also said that even though the killer killed DJ Sumbody, he will gain nothing from his death. He added that when they killed him, it did not occur to them that were killing someone who is an inspiration to the youth that is without direction.

The father of two said that DJ Sumbody did not bother anyone, he was a breadwinner at home. He was not scared of anyone which is why he continued to use the same car even after the previous attempt on his life.

JULIUS URGES FAMILY OF DJ TO BE STRONG

The 41-year-old urged the family of the slain Amapiano maker to be strong for each other. He also called on the community to support DJ Sumbody beyond the grave by downloading his music and going to his establishment, Ayepyep.