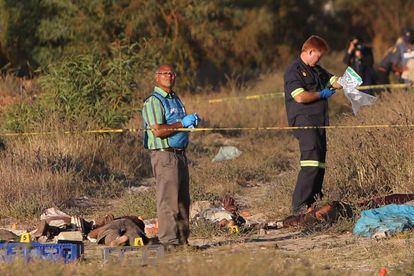 December 10, 2014. Forensic police officers investigate the scene where six bodies with their hands behind their backs are laying in the Joostenberg Vlakte near Kraaifontein,Cape Town. PHOTOGRAPH: ESA ALEXANDER/THE TIMES/GALLO IMAGES

December 10, 2014. Forensic police officers investigate the scene where six bodies with their hands behind their backs are laying in the Joostenberg Vlakte near Kraaifontein,Cape Town. PHOTOGRAPH: ESA ALEXANDER/THE TIMES/GALLO IMAGES

The Western Cape High Court sentenced a Cape Town vigilante group to effective life imprisonment on Wednesday, 28 July. The group was involved in the 2014 brutal murder and kidnapping of six young men from Wallacedene, Kraaifontein. The police said the community worked closely with authorities throughout the lengthy court case.

The ringleader of the vigilante group, Bangikhaya Koni, was sentenced to six life terms and thirty years imprisonment in November 2017, according to the National Prosecuting Authority (NPA).

NPA spokesperson Eric Ntabazalila said Koni – who was fingered as the initiator of the killing – explained the role he played after entering a plea and sentencing agreement with the state.

On 9 December 2014, Koni and a group of more than a dozen other men from Engcobo, Eastern Cape, went to Wallacedene, Kraaifontein and kidnapped six young men from a house. They took the victims to the nearby Joostenberg Vlakte and stabbed them and crushed them with rocks and bricks, said Ntabazalila.

Koni told the NPA that group killing was precipitated by the murder of a security guard, Tsututsu Ntsundu – a friend of Koni and his accomplices – who was also from Engcobo.

“Koni and his homeboys were unhappy that their homeboy was murdered,” said the NPA spokesperson. “They met, discussed and decided that they will help the family of the deceased by looking for his killers.”

Koni alleged that Ntsundu’s brother approached him after the murder and offered him R3000 to find the identity of his brother’s killers.

Koni and his friends set off to find said information and were told that Lulama Dunga (also known as “Gun”) participated in the murder of Ntsundu. Koni was also allegedly told that the Ngxabela brothers, Sandile and Sakhele, were the “actual killers”, according to Ntabazalila.

Koni returned to Ntsundu’s brother and relayed what he had learned. The NPA said the brother told Koni that the killers were gangsters and offered R10 000 for them to be tracked down and killed.

“The group got hold of Gun, gagged and tortured him. He informed them of the names of others who were involved with the killing and where the firearm and ammunition of the deceased were hidden,” said Ntabazalila.

Four of Gun’s friends were lured to a house where they were also captured – Zola Gayiya was already at the house but it is unclear how he got there. The group apparently came to meet Koni over allegations that they stole one of his shacks.

Koni admitted to the NPA that he played along and invited the four men to meet him at his house to “discuss their unhappiness.”

“Upon their arrival at the accused’s house, they were overpowered and had their legs and arms tied up and put in the same room as Gun and Zola,” said Ntabazalila.

Next, Ntsundu’s brother was called. When he arrived he was very angry and demanded that the killer must be found and promised to pay the R10 000 for the killing by tomorrow. According to the NPA, a man was approached to do the job but the gun he was given did not work. He left to apparently go and get another gun but never returned.

Koni’s group decided not to take the six men to the police as they believed they would be kept in custody for a short period and released and decided to kill the men themselves.

One of the vigilante’s had a gun but no bullets and three of the men decided to head out to look for a firearm with bullets late at night. The remaining group members were keeping watch over the six men at Koni’s house but their patience ran out and they bundled the men into a bakkie and drove to Redhill, Joostenberg Vlakte.

Koni alleged that members of his group told him they took the six men to Redhill where they stabbed them with a sword and other sharp implements since a firearm could not be located.

Koni said when he and the members of his group that were searching for a firearm with bullets arrived at Redhill they found the six suspects alive – lying on the ground, still tied up.

Koni admitted to the NPA that he initiated the stoning of the victims. He picked up a stone and hit one of the men and the group did the same with the rest of the men.

“They stoned the deceased and stabbed them with swords and other sharp objects to ensure they were dead before they left Joostenberg Vlakte,” said Ntabazalila.

Koni said the group split the money between themselves and even put aside R5000 for their bail in the event of their arrest. They said they’d use the same R5000 for a braai if they got away with the crime.

Koni confessed after his arrest and named his fellow accused. He also took police to the scene of the crime.

State Advocate John Reyneveld said the murders were premeditated and amounted to what is commonly known as a vigilante killing, at the time.

“The deceased were first tortured for hours before they were eventually loaded into a vehicle and driven to another scene where they were brutally stoned and stabbed to death,” said Reyneveld.

“They were defenceless at the time of their deaths since their legs were tied and their arms tied behind their backs. They were then left naked like animals and were only discovered the following morning.”

14 MEMBERS OF THE VIGILANTE GROUP SENTENCED TO LIFE IMPRISONMENT

On Wednesday, 28  July, Judge Chantal Fortuin sentenced 14 suspects between the ages of 25 and 56 to effective life imprisonment for the murder and kidnapping of the six men.

“The families of the deceased are happy. It was a long journey. They are grateful for the bravery shown by the female witnesses in this matter,” said Reyneveld yesterday.

“Sadly, the main witness, Nosicelo Rafu passed away earlier this year before she could witness justice in this case.”

The NPA welcomed the sentence with the provincial director of public prosecutions, Nicolette Bell, appealing to communities to not take the law into their own hands.

“These sentences clearly demonstrate that acts of vigilantism will not be tolerated by our courts and the NPA will commit its experience prosecutors to deal with these cases to secure sentences that fit the crimes,” said Bell.