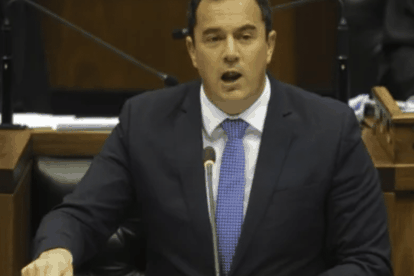 Democratic Alliance (DA) leader, John Steenhuisen says he stands with Busisiwe Mavuso who stormed out of a Standing Committee on Public Accounts (SCOPA) meeting on Friday.

Things got a little heated during the SCOPA oversight visit at Eskom on Friday, 22 April 2022. Mavuso had blamed the ruling party for the woes and state of national power supplier, Eskom.

STEENHUISEN STANDS WITH ESKOM BOARD MEMBER

During the meeting, Busisiwe Mavuso said current Ekom CEO, Andre de Ruyter is not 100% responsible or is to blame for the state of Eskom.

“What we will not accept and what we will not agree to, in spite of all the challenges we are facing as an organisation and all the efforts that have been put in place, is to have this board and André [de Ruyter] as the fall guy for the mess that this organisation is currently experiencing,” Mavuso told SCOPA in part.

Hlengwa accused Mavuso of resorting to theatrics as opposed to engaging them meaningfully. She hit back, saying she was stating “facts.”

“Because the reality of the matter is that this is not our mess. We have been brought in to clean it up. But we are not going to be the fall guy for the R300-and-whatever billion of Medupi and Kusile that have still not been completed.”

Hlengwa had some strong words for Mavuso before giving her an ultimatum – “Either you behave yourself or you excuse yourself from this meeting,” he said.

Mavuso chose to walk out of the meeting.

She has since been praised by many for her action, especially acknowledging that the issues facing Eskom and other state owned entities are partly due to cadre deployment, corruption and nepotism amongst others.

ALSO READ: ‘It is unfortunate’: Govt SLAMS Eskom board member over comments