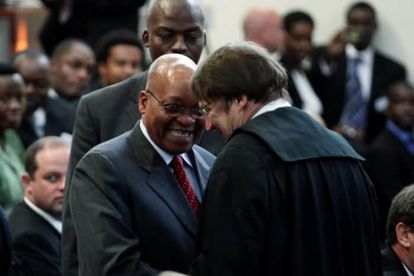 The Jacob Zuma lawyers must be some of the most overpaid and overworked individuals in the country. With tons of charges to handle and numerous cases, these guys face the often impossible task of getting Zuma off the hook. So, who are they really?

Heading in towards the 8 June court appearance, no one was 100% certain who would be representing Jacob Zuma in court. While Advocate Kemp J Kemp and Michael Hulley had always been Zuma’s long-time lawyers of choice, financial woes had thrown a spanner in the works.

Hulley confirmed to the media on 23 May that he and Kemp had “terminated” the services of counsel for Zuma’s upcoming corruption trial. He also explained that he had not resigned, but he had withdrawn due to the uncertainty around legal fees.

Hulley revealed that he would only be acting for the appearance on 8 June.

During that appearance, Zuma’s team managed to obtain a postponement to 27 July in order for them to seek answers from the Presidency regarding the payment of legal fees.

Zuma believes that The Presidency should pay his costs, due to him being Deputy president at the time.

The state wants to officially begin the prosecution trial on 12 November.

Who is Michael Hulley?

Back in 2015, records showed that Michael Hulley made a whopping R1.6 million just from his retainer to then President Zuma.  When he first started as Zuma’s legal advisor he took home R693 per hour, by 2015 that had risen to R813.

Zuma and Hulley were brought together by the KwaZulu-Natal taxi industry. A hit outside the Durban high court set Hulley on a path to the top.  Hulley first managed the bail application for Zuma’s cousin, a KwaZulu-Natal taxi boss named Mandla Gcaba.

Zuma’s cousin had been arrested for allegedly ordering the hit.

At the time, Hulley had just set up his own practice in inner City Durban after recently finishing his articles.

Not only did Hulley organise the bail, he also managed to have Gcaba acquitted.

Zuma was broke after being fired by Mbeki in 2005, he needed a new lawyer. The family recommended Hulley and so the long winding court journey began.

Today, Hulley and Associates’ office is situated in La Lucia Ridge, on the border of Umhlanga. The majority of his business passes through his suites at The Forum in Sandton.

Former President Jacob Zuma will go to the Pietermaritzburg High Court on the 27 of July. #ZumaCharges here he greets lead prosecutor Billy Downer and his attorney Michael Hulley #ZumaCharges pic.twitter.com/gRoClCsA77

Who is Kemp J Kemp?

Kemp J Kemp proved his ability when he obtained the biggest victory of Jacob Zuma’s career – Having him acquitted during the infamous rape trial. 27 months later, he managed to have the court declare the NPA’s “arms deal” decision to charge Zuma invalid.

Kemp was told by almost everyone that it would be impossible to get rid of the charges, but he still did.

With a nickname like “Unkempt kemp”, the advocate is known outside the courtroom for being more likely to giggle than answer a serious question.

Also described as “an absent-minded professor”, this guy is living proof not to judge a book by its cover.

During the rape trial, the state asked the judge to keep their discussions for outside the court in order for the media to hear what’s going on.

Kemp agreed, but was still ready to jokingly poke fun at the media and their coverage of Zuma.

“I am happy, my lord,” responded Kemp. “But I do have a concern. If members of the media are able to hear, what excuse will they now have for getting things wrong?”

While Kemp seems to have retreated into the woods over finances, Zuma’s latest court appearance might indicate that Hulley could stick by him in the future. With Zuma’s team waiting for an answer from Cyril Ramaphosa, all eyes will be on the new president.