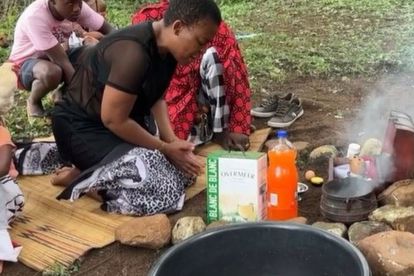 Zodwa Wabantu may be known for some dodgy things, but using muti on her enemies was never one of them – until now.

Zodwa’s revelation comes a few days after she was seen shopping for two live chickens whilst referencing her “underground gang”, a slang term for ancestors.

Fans have accused Zodwa of using muti after she posted a short clip of herself performing an unknown ritual.

The star – seen in the same outfit as the chicken video – is pictured kneeling on a straw mat as a pot boils an unknown concoction in front of her. Seated beside Zodwa is what seems to be a sangoma.

But even more astonishing was her caption, clearly aimed at her critics.

“Is this some kind of witchcraft?”

“You are far too beautiful to carry hate with your precious heart, just forgive them and free them from your heart”

And whilst Zodwa Wabantu has many friends and fans, there are a few she wouldn’t exactly call her friends in the industry.

They include entertainer Skolopad, singer Zahara and Celeste Ntuli to name a few. Zodwa at one stage even had beef with Khanyi Mbau.