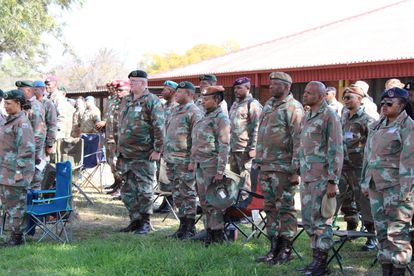 The SANDF is going to lose more than 3 000 members in the medium term due to budget constraints. PHOTO: Facebook/SA National Defence Force

The SANDF is going to lose more than 3 000 members in the medium term due to budget constraints. PHOTO: Facebook/SA National Defence Force

There’s a lot to unpack with this one. First and foremost, it’s worth noting that SANDF is now ‘essentially broke’. That’s according to several sources who went public over the weekend, stating that the army ‘cannot be deployed’ due to a dire financial situation.

Is SANDF too broke to protect the country?

SANDF is strapped for cash. That’s the bottom line.

The military is allegedly unable to buy parts for vehicles, and they have run out of spares that they can take from other armoured motors in their fleet. Soldiers were considered for an internal deployment at the start of the month, but a lack of cash has put paid to that.

With the security of SA surely compromised by this ghastly situation, the last thing SANDF or the Defence Ministry needs is wasteful expenditure. But that’s exactly what critics are accusing Thandi Modise of, after she decided it was necessary to fly out to Russia for a Security Conference.

The DA have questioned Minister Modise’s decision-making skills, given the financial and moral implications of making this trip. After invading Ukraine six months ago, Russia has become an international pariah – but South Africa failed to distance itself from Mr. Putin this year.

In fact, they have kept things rather cordial.

No official condemnation has been sanctioned by officials in Mzansi, and President Ramaphosa has had more than one amicable phone-call with the Russian autocrat. ANC ministers also held a civic reception for Russian diplomats earlier in 2022.

Modise has, however, thrown caution to the wind. Neither SANDF budget constraints nor moral obligations have been able to keep her away from Moscow. Kobus Marais, who serves as the Shadow Defence Minister, is concerned that this visit will ‘humiliate SA on the international stage’.

“Minister Modise must have forgotten the damage her previous party with her Russian comrades had on South Africa’s foreign image. The country cannot afford a similar fallout. In fact, we find it shocking that the Minister can justify this visit financially – given SANDF’s dire straits.”

“All in a day’s work for a Minister who celebrated and drank champagne with the Russians while they were invading Ukraine. The money being wasted on Minister Modise’s trip should have been channeled into capacitating the Defence Force…”