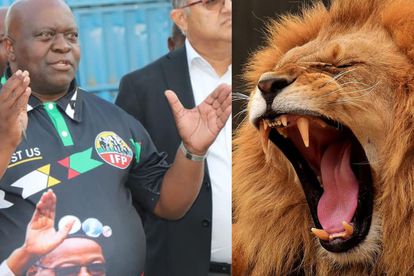 The IFP leadership in KZN will tomorrow, Friday, 26 August, embark on a fact-finding mission, following an outcry over wildlife crisis in uLundi.

IFP SEEKS TO ADDRESS THE ISSUE OF WILDLIFE

ALSO READ: TWO lions on the loose in KZN – here’s where they were last seen

According to this governing party in this region, the Nhlungwane Reserve Community and communities surrounding iHluhluwe-IMfolozi Park Game Reserve have been on the receiving end of wildlife attacks on their livelihoods.

“These communities have allegedly suffered stock loss and some locals have suffered terrible injuries due to wildlife invasion in their areas,”

The IFP KZN leadership will converge at the Sasol Garage, Road P700 in Ulundi at 10 am and proceed from there.

WHY THE NEED FOR AN URGENT SOLUTION TO THE ISSUE

This meeting follows the latest escape of lions from the iHluhluwe-IMfolozi Park Game Reserve.

On Tuesday, there were two lions spotted by a local near the Intibane Lodge in the Babanango policing precinct, according to East Coast radio.

These two lions follow the frightful escape of more in the same area.

To make matters worse, residents’ fears increased after a half-eaten carcass of a cow was discovered.

Because of this life-threatening crisis, the community recently took out their frustrations on the Hluhluwe-iMfolozi game reserve during which the protesting community members torched a guard hut at the entrance.