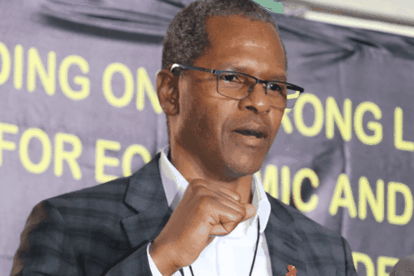 At the height of xenophobia being the trending topic in South Africa’s social discourse, IFP’s new leader, Velenkosini Hlabisa offered an alternative measure for government to deal with the foreign national complexities the country’s currently facing.

Who is Velenkosini Hlabisa?

In a recent interview with Sowetan Live, Hlabisa shared his neo-liberalist views on a range of topics, including the issue of illegal immigration and how unskilled foreign nationals affect demand in the jobs market.

The 54-year-old has come in and filled some big shoes after he was elected to replace IFP’s only — and longest-serving — leader, Mangosuthu Buthelezi.

Hlabisa was a municipal councillor for 20 years before he was anointed into the mayoral role in the Big Five Hlabisa Municipality, where he valiantly served between 2016 and 2019.

Buthelezi’s decision to step down after a long tenure, coupled with the strides the IFP made in the elections, securing official opposition status in Kwa-Zulu Natal, opened the path for Hlabisa to usher in a new era for the political party.

Hlabisa was probed on his thoughts about the recent xenophobic violence we saw in the last month or two, and the current state of illegal immigration.

His solution was simple: the government needs to proactively root out the undocumented and unskilled foreign nationals and keep those we need.

He indicated that more work needed to be done to assist illegal immigrants in being deported back to their respective home countries, rather than allowing them to pile into borders with nothing to offer.

“All foreign nationals who are within the country and have skills, but are not documented must be documented and retained. those without skills, but are looking for jobs, the government must assist them to return to their original countries,” Hlabisa proposed.

The IFP added that there was no feasible reason why South Africa preserved unskilled foreign labourers when there were capable locals who deserved priority consideration in the informal jobs these illegal immigrants obtain due to their below-market affordability.

“If you allow anybody, you will reach a situation that will be beyond control. People will say if these people were not here, we would have had a job of being a cleaner [for example],” he said.

Habisa warned that xenophobia would be a common occurrence in South Africa if the government did nothing to address illegal immigration.

“If this is not being attended to, we are sitting on a ticking time bomb. There is no reason why they should be here while we also have people [South Africans] who are unemployed with no skills like foreign nationals,” he exclaimed.