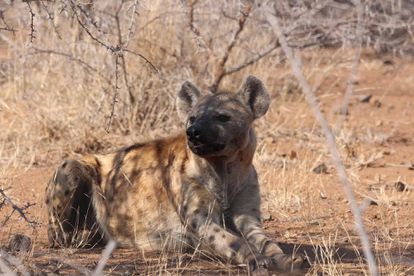 THE HYENA INJURED THE SOLDIER ON BOTH HIS HANDS

He said the incident took place in the early hours of 6 September 2021, where the SANDF is based.

“It is reported that the staff sergeant heard the movement of the hyena in the covered area of the ops room and kitchen.

“He called on his colleague to assist in chasing the animal out, but unfortunately, it got stuck under the fence. The two members approached the area on foot, not aware that the animal was trapped in the fence.”

On approaching the hyena on foot, the animal broke free and immediately attacked the SANDF member injuring him on both hands.

“A third member went to the rescue and fired a single shot with a 9mm pistol injuring the animal which the fled the scene and managing to rescue his colleague.

Dlamini said the SANDF member is still in hospital receiving treatment for his injuries. His condition is stable and not life-threatening.

“The Skukuza Special Operations Section Ranger has not been able to locate the animal, and it is presumed that it was injured judging from the blood trail out of the camp.

“The conclusion is that this was an unfortunate incident where the animal was under duress and attacked while trying to flee the base.”