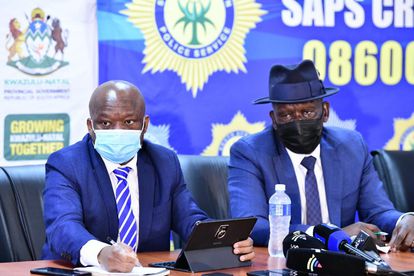 SIhle Zikalala has addressed the media alongside Police Minister Bheki Cele on Tuesday, as the pair detailed the full extent of the horrors that took place in Phoenix last month. The KZN town saw some of the worst vigilante violence in our domestic history, which eventually led to the deaths of 36 people during widespread riots.

Cele revealed that victims were ‘butchered, burned, and beaten‘ by community members during the height of the looting sprees. Some were dragged from their cars, others were picked off with impunity. Both public figures acknowledged that racial tensions played a major part in this tragic event, and vowed to soothe tensions in affected suburbs.

However, Sihle Zikalala has already moved to praise social activists who are working to mend this shattered trust. The KZN Premier has noted that Indian and Black African citizens have come together – under the ‘All Lives Matter’ banner.

Now, if you recall, the term All Lives Matter was coined shortly after protests for Black Lives Matter took over the world. Some see it as an innocent expression of non-racialism, whereas others believe it trivialises the very real issues that the black community has been fighting against throughout human history. But context matters…

Regardless of what has brought these fractured communities together, they agree that the events of July 2021 were wholly unacceptable, and can never be allowed to happen again. Zikalala hailed the healing that has taken place so far:

“We are encouraged that in Phoenix, Chatsworth, Verulam, Northdale, and many areas, good citizenship thrives. We have seen groups of social activists in the Indian community joining with Africans in the All Lives Matter movement to call for an end to racism in all its forms. Indeed, All Lives Matter!”

“We have seen the worst of these crimes, including murder, being committed in the name of protecting the community. Since then, the social solidarity demonstrated by the community of Phoenix in pursuit of peace and unity, among all people across different races, must be applauded.”

A team of (31) experienced detectives from the province and national, have been deployed to investigate, make arrests and attend court cases to ensure justice prevails.

Working closely with the communities, their investigations have led to the arrest of 22 suspects so far. pic.twitter.com/TGMqGdJf7j