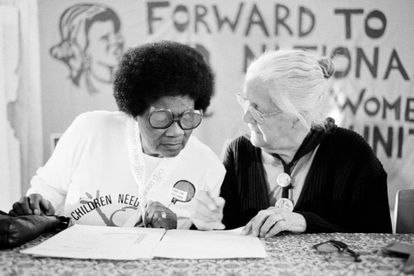 So just who is the South African liberation hero, Helen Joseph, whose 116th birthday, Thursday’s Google Doodle is celebrating?

Joseph, born, Helen Beatrice May Fennell in Easebourne, United Kingdom, in 1905, grew up in London with her parents and graduated from the University of London with a degree in English in 1927.

She travelled to India to teach at a girls’ school for three years and stopped over in Durban on her way back home to England in 1930. She became friends with Dorothy Stubbs, whose father, Harry Stubbs was the headmaster at Clifton School. When Dorothy left her teaching post at the school to get married, her father hired Joseph who worked at the school from 1930 to 1931.

Joseph met Jewish dentist, Billie Joseph, 17 years her senior, who she married and later divorced after World War II. During the war she worked as an information and welfare officer in the Women’s Auxiliary Air Force before deciding to become a social worker.

Joseph then worked for the Garment Workers Union where she met Solly Sachs, Johanna Cornelius and Anna Scheepers. She later became a founding member of the Congress of Democrats (COD), a white ally to the African National Congress (ANC). She became national secretary of the Federation of South African Women (FEDSAW) in the 1950s.

Joseph was one of struggle leaders who read out clauses of the Freedom Charter at the Congress of the People and on 9 August 1956 she was one of the leading organisers of the 20 000 strong women’s march to the Union Buildings. South Africa marks this event annually on Women’s Day on 9 August.

Joseph was arrested on a charge of high treason in December 1956, banned by the Apartheid government in 1957 and became the first person to be placed under house arrest in 1962.

Joseph survived several assassination attempts, including an incident where a bomb was wired to her gate and bullets fired through her bedroom window.

She was loved as a mother figure by many, although she did not have children of her own, the daughters of Winnie and Nelson Mandela – Zinzi and Zenani – and Bram Fischer‘s daughter, Ilsa spent time in her care.

She was awarded the ANC’s highest award, the Isitwalandwe/Seaparankoe Medal for her devotion to the liberation struggle as a symbol of defiance, integrity and courage and she was admitted to the Order of Simon of Cyrene in 1992, the highest honour the Anglican Church of Southern Africa in the same year.

Places named after Joseph in South Africa include: