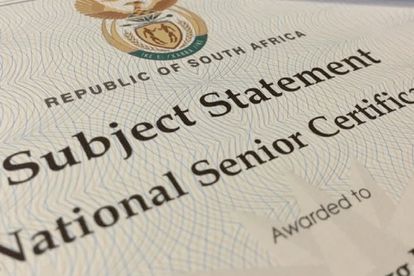 Reminder: TODAY is the closing date for a 2022 matric exam REMARK. Image: careersportal.

Reminder: TODAY is the closing date for a 2022 matric exam REMARK. Image: careersportal.

An employee of the Hawks is facing charges of fraud for producing a fake matric certificate when applying for the job in the Western Cape office.

HAWKS OFFICIAL APPLIED TO BE A SECURITY OFFICIAL

The position of a security official at the Hawks offices in Bellville, Western Cape, was advertised in October last year.

Phelisa Lande, 45, applied for the position. She was the successful candidate and started her duties on 1 April this year, said Hawks spokesperson Zinzi Hani.

“When she applied for the said position, the accused [Lande] allegedly submitted a fraudulent matric certificate, which was one of the requirements for the post. As a result, [Lande] was appointed as a security official in Bellville, Western Cape office.”

But the Hawks noticed the certificate was a bit suspicious. They then vetted the qualifications with the Department of Education.

“It was during this process that the allegation of fraud was discovered and further investigation revealed that the accused submitted the same qualification to her previous employment, where she was employed as a security officer,” Hani said.

The Hawks went after Lande.  She was arrested on Monday, 8 August by her employer’s Serious Commercial Investigation team in Bellville for falsifying her qualficiation.

Lande is however released, as she was granted R1 000 bail by the Bellville Magistrate’s Court on Wednesday. She faces charges of fraud.

“The matter has been remanded to Tuesday, 6 September 2022, for legal representation.

ALSO READ: 81-year-old among seven charged with fraud and corruption

Meanwhile, a pair of company directors have joined another director of a separate company on charges of fraud in Gauteng.

Buthelezi is a director for Energy Fabrication (Pty) Ltd. The two companies embarked on a joint venture in 2017.

“The loan was meant to fund a new company which would specialise in heavy steel construction. The agreement between the parties and IDC was approved on the basis that the amount will be divided into three aspects.”

The money was to be divided into a property loan, working capital and wiping of the companies’ debts, said Ramovha.

ALSO READ: Woman sentenced for defrauding her employer since 1998

COMPANY DIRECTORS RECEIVE LOAN, MISUSE IT AND GET ARRESTED

But the directors instead used it for personal gain and leisure, breaching the contract with the IDC, said Ramovha.

This was reported to the Hawks’ Serious Commercial Crime Investigation team in May 2021, leading to the arrest of the trio.

Matitoane and Tseki appeared before the Palm Ridge Specialised Commercial Court on Wednesday on charges of theft and fraud.

“The IDC has suffered a loss of R185 million as a result.”