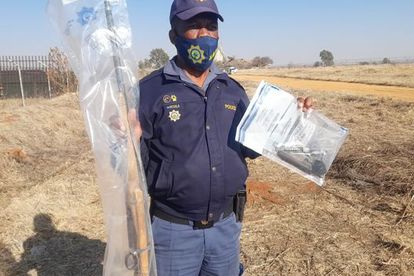 A group of suspected rhino poachers was caught near the Rhino Borma in Letsatsi La Africa, Vierfontein where the fence was already cut, and one of them allegedly aimed a rifle at the owner and his two sons.

ONE OF THE SUSPECTED RHINO POACHERS WERE SHOT AND INJURED

Police spokesperson Brigadier Motantsi Makhele said it is alleged that there were five armed men in total suspected to be poachers.

“The complainant responded by firing shots at the poachers.

“One was wounded on his right leg and right arm. The wounded 48-year-old suspect was taken to a hospital in Klerksdorp under police guard.”

Makhele said the second suspect (43) was also apprehended in the vicinity of the scene.

Three suspects are still at large.

One pistol, magazine with five rounds, a .375 rifle with one round, and an axe were recovered at the scene.

Makhele said a similar case to this occurred on Friday, 30 July 2021 where poachers shot, killed, and de-horned a rhino on the same farm.

Police are still searching for suspects involved in this case.

Cases of attempted murder and rhino poaching are being investigated under Bioversity Act 10 /2004 Section 57, carrying out restricted activities involving Species Listed as threatened.

The two suspects will appear at Viljoenskroon Magistrate’s Court soon.

Barbara Creecy, the Minister of environment, forestry, and fisheries, said that the easing of lockdown curbs increased the movement of poachers.

She said from January to the end of June 2021, 249 rhino have been poached for their horn in South Africa.

ALSO READ: Update: Two in court for possession of 19 rhino horns worth millions

“While this is higher than the number of rhino killed for their horns in the same period last year, at 166, it is less than the 318 rhino that was poached in the first six months of 2019.