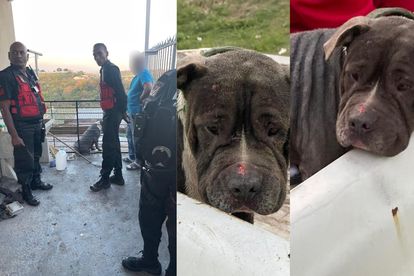 The injured Pitbull after being attacked by neighbours. Photo: RUSA/ Facebook.

The injured Pitbull after being attacked by neighbours. Photo: RUSA/ Facebook.

A Pitbull was left seriously injured after being attacked with spades and sticks in retaliation for its wrongdoing.

According to Reaction Unit South Africa (RUSA), this injured Pitbull was assaulted after it attacked a German Shepherd and Staffordshire Terrier at their home on Krantzwood Close in Trenance in KZN on Tuesday, 16 August.

Members of Reaction Unit South Africa (RUSA) were dispatched to the property at approximately 16:44 after receiving multiple calls for assistance from residents in the area reporting the attack.

NEIGHBOURS ATTEMPT TO SEPERATE THE DOGS

Several residents were attempting to separate the dogs without success. Reaction Officers detonated a fire extinguisher which neutralised the situation. One of the Pitbulls fled the property and returned to its owner.

It was established that the Pitbulls fled from a property on Lacefern End while their owner drove onto the property. The dogs thereafter entered a yard approximately 500 meters away from their home shortly after the family opened their driveway gate for a visitor.

“The Pitbulls attacked the German Shepherd cross and a Staffordshire Terrier. The incident was witnessed by the family including four minors who were in the yard when the unfamiliar dogs ambushed their pets. They began screaming for assistance. One of the children hid in the prayer place during the attack on their pets”.

RUSA says their screams alerted neighbours who arrived at the property and attempted to separate the dogs.

“Residents doused the dogs with water before they beat the male Pitbull with spades, sticks and flower pots in an attempt to stop the attack.”

When Reaction Officers and the owner of the Pitbulls arrived shortly thereafter, the German Shepherd was seriously injured.

Fortunately, the family’s second dog managed to escape after she hid under a vehicle.

The attacking dog was also bleeding from injuries to its body and walked with a limp. The injured dogs were transported by their owners to veterinary clinics.

“The owner of the German Shepherd informed Reaction Officers that she intends on registering a criminal case against the owner of the Pit Bulls after her dogs receive medical attention,” RUSA reported.