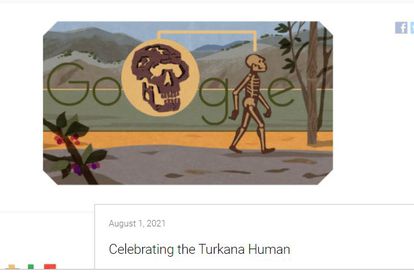 Google celebrates the Turkan Human with its entertaining doodles.

Here is some information about the Turkan Human and why it it is significant enough to be celebrated with a Google Doodle.

The Turkana Boy, or ‘Nariokotome Boy’ as he is sometimes called, lived about 1.5 million years ago.

The ‘Turkana Boy’ skeleton has allowed scientists to find out a lot of information about body size, body shape, and growth rates of Homo erectus.

He was the most complete early human skeleton found.

He was about 8 to 10 years of age when he died but was already 1.6 metres tall and may have reached 1.85 metres as an adult.

Almost 90% of his skeleton was recovered and has provided valuable information on this species’ body size, proportions and development.

The Turkana Boy had a tall, slender body adapted for striding out across the extensive savannah plains. He also had a more human-like face with a nose that projected outwards and a larger braincase.

He was once thought to be a member of the species Homo erectus, but after much debate, was classified as Homo ergaster.

Sometimes denoting an important anniversary and other times offering a quirky game, the Google Doodle brings together art, tech, history, sports, science, and pretty much every other facet of life and it all began when Page and Brin went to Burning Man in August of 1998. Before heading to the Nevada fesitival, the pair took to the homepage of their budding search engine and added the Burning Man’s logo to their own logo, just behind the second ‘O,’ and from that, the Google Doodle was born.