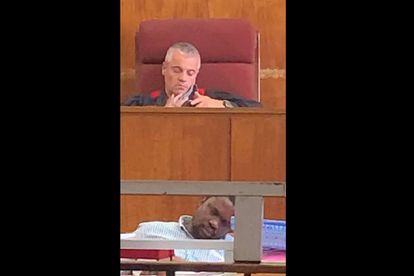 This may not be the most graphic video you’ll ever see, but it could go down as one of the most shocking. Complainant Fazloen Hoffman has taken her grievance to Public Protector Busisiwe Mkhwebane and the South African Parliament, after she caught one of the judges at Goodwood Magistrate’s Court openly texting while presiding over a case.

We say “caught”. This was hardly a covert sting operation. Magistrate Shaun Lee was seen using his phone in full view of everyone in the courtroom last Friday afternoon. If that doesn’t scream misconduct, he was ably supported by his deputy Happy Mbabane, who was sat at the front of the room falling asleep.

The video at the bottom of this article shows that a case is quite clearly ongoing, but neither of the lawmen look particularly interested in what was going on. The woman behind the camera has even accused Lea of trying to rush proceedings in order to get out and go for lunch.

Hoffman uploaded the scarcely-believable footage to her Facebook and claimed that their unprofessional behaviour did not stop there. She says that Lea was angered when she dared to confront him about his phone usage and defended himself by explaining that he was “texting his boss”.

Meanwhile, Mbabane is said to have been “verbally abusive” during their confrontation but soon backtracked when Hoffman revealed she had filmed them in the act. Her alleged encounter with Mr Lea makes for a fascinating read:

“He seemed unstable and extremely scary. It’s been a long time since I was spoken to in such a manner. Mr Lea shouted that he was texting his boss Mr de Beer and showed me the WhatsApp chat briefly.”

“He asked the secretary to take a pic of the screen and did not want to consider that he was not on his phone at all. He tried shoving his phone in my face in front of everyone and then scoffed and blew me a kiss before marching off. He left a shocked audience in his wake.”

Of course, there are two sides to every story. We’ve approached both the Goodwood Magistrates Court and the Magistrates Commission for their version of events. The most we got from the regional courthouse was that a “smear campaign” was being orchestrated against before they refused to answer any more of our enquiries.

Mahomed Dawood is the Secretary of the Magistrates Commission, which is based in Pretoria. He confirmed that an investigation is underway to establish what exactly lead to this situation.

“The complaint related to the Goodwood Magistrate’s Court was duly received at the Magistrates Commission. The matter was referred to the Ethics Section of the Commission to institute an enquiry into the matter.”

Watch the Goodwood Magistrate’s judge use his phone during a case here: