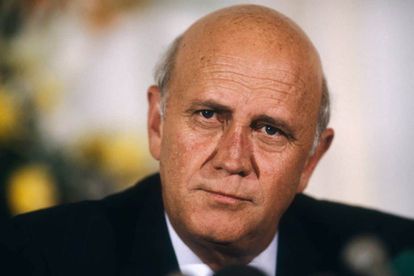 Former state president FW de Klerk died at his home in Cape Town on Thursday at the age of 85.

He was South Africa’s last white president and was a key actor in the country’s transition to democracy. Here are some of the key moments of his role in the history of South Africa.

MORE ABOUT HIS CAREER

He held several ministerial positions in the Cabinet of President P.W. Botha, including:

In 1982 he became the Transvaal leader of the National Party after Andries Treurnicht quit the party.

In 1985 De Klerk was appointed chairman of the Ministers’ Council in the House of Assembly and in 1986 he became the House’s leader. When P.W. Botha resigned as leader of the National Party in February 1989, he was succeeded by de Klerk.

In September, he was elected the new State President. He soon announced his policy of reform: he hoped to create a suitable climate for negotiations that would end apartheid and bring about a new Constitutional dispensation for South Africa, based on the principle of one person, one vote.

On 2 February 1990, de Klerk lifted the ban on the ANC, the South African Communist Party (SACP) and the Pan Africanist Congress (PAC) and on 11 February 1990 Mandela was released.

“The former president died earlier this morning at his home in Fresnaye after his struggle against cancer. He was 85-years-old. He is survived by his wife Elita, two children Susan and Jan, and his grandchildren,” it said.

President Cyril Ramaphosa is expected to announce details of De Klerk’s state funeral in due course.