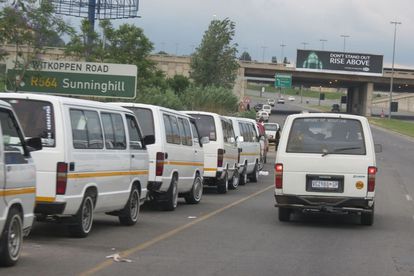 Santaco does not believe that the fuel levy reduction will make any difference to its industry. Photo: PapJeff / Flickr

Santaco does not believe that the fuel levy reduction will make any difference to its industry. Photo: PapJeff / Flickr

A number of organisations have expressed their thoughts about the proposed temporary reduction of fuel. The South African National Taxi Council (Santaco) said the reduction will not make any difference in their sector.

Finance minister’s fuel levy reduction was not welcomed by all

On Thursday, 31 March, Minister of Finance Enoch Godongwana announced that the fuel levy will be reduced by R1.50 per litre. The reduction will run from 6 April until 31 May. The levy currently accounts for R3.85 per litre.

Santaco’s Chief Strategic Manager Bafana Magagula stated that a number of costs had risen since the last fuel increase. He shared that this has already impacted the price of vehicles, increases in the cost of batteries and even increases in interest.

Magagula said that people who signed contracts with banks during the time of the increase can not do away with the contract. He continued by explaining that due to the COVID-19 pandemic, half loading and 70% capacity is still in existence for long-distance operations.

“This makes no difference whatsoever, we have not benefited from what the Minister said,” Magagula said.

Some believe that the reduction is somewhat beneficial

According to IOL, the Chief Executive Officer at Road Freight Association Gavin Kelly stated that any reduction in the fuel price is a good thing. He explained that the immediate relief for customers will not be felt as the fuel increases made previously are only working through the logistics chain.

ALSO READ: Will the fuel levy cuts stop a petrol price increase in April? Probably not…

He went on to say that the current exchange rate is negatively impacting consumers and that Government needs to make changes. While Kelly agreed that any relief will go a long way, he did say that the two months of relief has a few uncertainties regarding what to expect.

National spokesperson for the e-hailing industry Vhatuka Mbelengwa shared that a permanent solution would be preferable.

“A more permanent solution that can stabilise fuel costs would be preferred, but in the interim, we will take any sort of relief we can get,” Mbelengwa said.

What is the price expected to increase by?

The prices of petrol and diesel are still expected to rise this month, even if its not as high as previously thought. April’s fuel prices have not yet been announced but late-month data supplied by the Central Energy Fund revealed the possible increases.