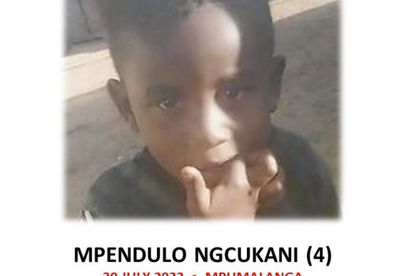 Mpendulo Ngcukani’s body was found on Friday, 9 September. He was reported missing on 30 July 2022. Photo: Twitter/@072MISSING

Mpendulo Ngcukani’s body was found on Friday, 9 September. He was reported missing on 30 July 2022. Photo: Twitter/@072MISSING

The body of a four-year-old boy, Mpendulo Ngcukani, was found next to the N11 Road near Middelburg, Mpumalanga on Friday, 9 September. He was reported missing on Saturday, 30 July.

The police said a fruitless search was launched immediately after the four-year-old’s disappearance. Community members also helped and the investigating officer brought in several other units, including a mounted unit, FCS unit and divers, to “intensify the search.”

Last month, frustrated residents from Extension 24 burnt tyres along the N11 out of frustration with the slow progress being made in the case, according to the Benoni City Times.

The police are currently investigating an inquest docket and will be looking into whether the four-year-old died of natural causes or not.

“I strongly believe our investigators will dig more information and bring forth more details, leading to the discovery of his body,” said Mpumalanga police commissioner, Lieutenant-General Semakaleng Manamela in a statement on Friday.