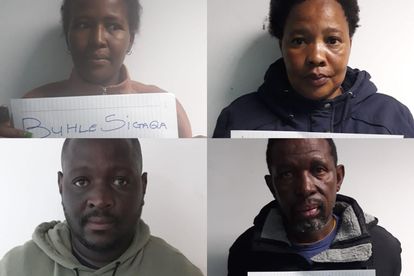 The Mthatha Specialised Commercial Crimes Court released the suspects who are accused of fraud and money laundering on R3000 bail each, said the Hawks on Wednesday, 28 September.

FORMER POST OFFICE OFFICIALS AND THEIR LOVERS BUSTED FOR FRAUD

The suspects include the former branch manager of the Elliot post office, Palesa Aviwe Sigaqa, 37, and her husband, Masonwabe Madlingozi, 40, who is a former police official.

The two other accused are a former post office teller, Busiswe Geleba, 35, and her husband, Luyanda Brighton Geleba, 50, who used to be a teacher.

READ: Stealing from the poor: Hawks arrest over 80 in R21m SASSA fraud probe

Their next court appearance is expected on 25 November. The matter was postponed for the defence to be provided with copies of the case files and other preliminary matters.

The quartet was arrested by the Hawks’ East London-based Serious Corruption Investigation team in Queenstown on 27 September.

“It is alleged that during the period 2020 and 2021, Post Office officials were stealing SASSA  grant funds for their personal enrichment. Information was received by Crime Intelligence and handed over to the Hawks for extensive probing,” said Mgolodela.

READ: 97 parolees rearrested for rape and murder in first quarter of year

The post office officials allegedly siphoned money meant for SASSA grant beneficiaries through dodgy accounting tricks on the system and it also alleged that ghost beneficiaries were created. “The Inter Grant Payment System (IGPS) and the accounting system were manipulated in this fashion.”

In total, the suspects siphoned at least R10.2 million from SASSA, said the Hawks.

REPORT: R11m man Njabulo Blom to stay at Chiefs after all?