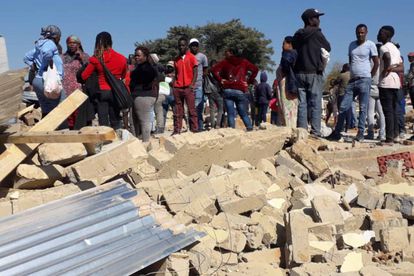 The balance of law and order is a fragile one in South Africa, as the Red Ants found out the hard way this week. The Private Security Industry Regulation Act (PSIRA) banned them from operating on Tuesday, but the decision has not been well received by the Freedom Front Plus (FF+).

The Red Ants are known infamously for their work in evictions and the relocation of unlawful occupiers. They do not work independently. In most cases, the security company acts as an arm of law enforcement in situations that involve the illegal occupation of land – colloquially known as “land grabs”.

Things came to a head at the end of May, when they began removing structures in Alexandra, Johannesburg. Their typically robust style ended up causing fatalities, and they were blamed for knocking down buildings that were perfectly legal in their standing.

After an almighty row with the City of Joahnnesburg – who have been blamed for issuing the Red Ants with the brief to destroy the properties – a total suspension of their operations has been put in place. But the FF+ are in dismay. They don’t agree with the decision and representatives predict that this will spark a wave of “large-scale” land grabs:

“The Red Ants – who usually act under a warrant – also did so in this case, and nowhere did they act outside their mandate. The fact that the service’s hands are now tied open the door to the advancement of large-scale land invasions and this is particularly threatened by municipal grounds.”

“Open spaces such as parks can now be occupied and if the occupants are not removed within the prescribed time, the problem can quickly worsen. City councils were cut off with these actions against the Red Bulls as the Red Bulls were widely used with illegal occupations. Municipal authorities do not have the ability to do it themselves.”

The FF+ are generally concerned with the state of land in South Africa. As well as expressing their fears over the non-compensatory model of expropriation planned by the government, they are also the main activists against farm murders. Last week, party leader Pieter Groenewald urged farmers to “protect yourselves at all costs“.

Finishing their statement, the FF+ vowed to “monitor the situation closely”. Volatile protests over land have erupted in the townships of both Johannesburg and the Western Cape either side of 2019’s general election. It hasn’t yet been revealed if the Red Ants’ suspension will be lifted if similar demonstrations flare-up again.

Football this weekend: What to watch and when to watch it