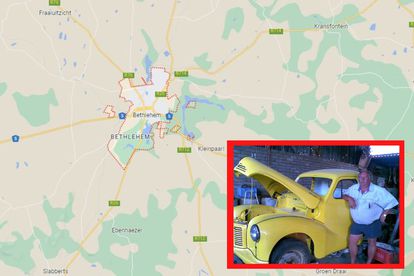 Police are yet to arrest the two men who attacked and BRUTALLY beat a 67-year-old farmer on his farm in Bethlehem in the Free State.

THE INJURED FARMER WAS FOUND TIED UP IN THE PIG PEN

Sakkie Bell (67) was found on Sunday with head, face, and body injuries in a pig pen on his farm in the Bethlehem district in the Free State. His hands were tied behind his back with wire.

Two attackers ambushed Sakkie earlier in the morning at his farm, Fairview.

Police spokesperson Warrant Officer Mmako Mophiring said police received a complaint of house robbery at Fairview Farm in the district of Bethlehem around 12:20.

THE DOOR OF THE HOUSE WAS FOUND LEFT OPEN

Sakkie’s fiancé said she noticed that the door of the house was left open when she returned home at about 11:00.

“She entered the house and called for Sakkie, but he was not inside the house. Her wardrobe door was opened. She started to suspect that something had gone wrong when she noticed that ammunition was lying on the floor and the firearms safe was also left open.

“She then noticed that one rifle and pistol were stolen from the safe and started looking for him.”

AMMUNITION WAS LYING ON THE FLOOR, AND THE FIREARM SAFE WAS OPEN

Mophiring said the Bethlehem Neighbourhood Watch was called for assistance.

“On their arrival, they found him in the pig cage with head, face, and injuries on his body. He was taken to a local hospital to get medical treatment. She further noticed the car, house keys, shoes, and cellphone of Sakkie were stolen.”

He furthermore said a case of house robbery and attempted murder is being investigated.

ALSO READ: Husband beaten to death in front of wife at party outside Dullstroom – Report

Do you have a news tip-off? If you have any news stories or tip-offs for us, or if you have video footage or links, we would love to hear from you. Please WhatsApp your photos to  060 011 0211. Please remember to include your name, surname, and as many details and information as you have. You are, of course, welcome to send anonymous tips and information.