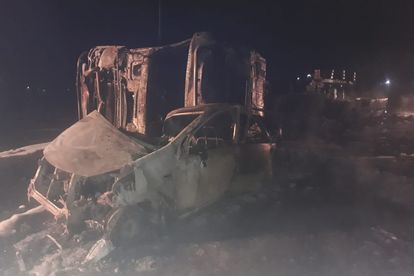 A family of five was burnt beyond recognition when their car collided with a petrol tanker in Alberton on Wednesday evening.

WHAT HAPPENED ON WEDNESDAY EVENING?

The accident happened on the corner of Swartkoppies and Kliprivier Roads.

Ntladi said on arrival at the light motor vehicle, and the petrol tanker on its side were both well alight.

SPECIALISED FOAM AND WATER ENGINES WERE USED TO CONTAIN FIRE

“Specialized foam tanker and water tanker fire engines were used to contain and extinguish the blaze. What seems to be the entire family members inside the light motor vehicle, five lives perished and burnt beyond recognition.”

He furthermore said it is alleged that both the truck driver and assistant sustained critical injuries and were transported to a nearby hospital for further medical care.

The cause of the crash is undetermined and still under investigation by law enforcement officials.

THE CAUSE OF THE ACCIDENT WILL BE INVESTIGATED

Two months ago the burnt and decomposed bodies of a kidnapped family of five, including a two-year-old and a one-month-old baby, were found on a plantation in Richmond on Monday.

According to police spokesperson Brigadier Jay Naicker, the family was kidnapped from their farm in Boston just outside Pietermaritzburg on 16 November 2021.

“The victims were kidnapped from their farm in Boston just outside Pietermaritzburg. Their vehicle was also missing. A missing person docket was reported at Boston SAPS on 19 November 2021,” he said.