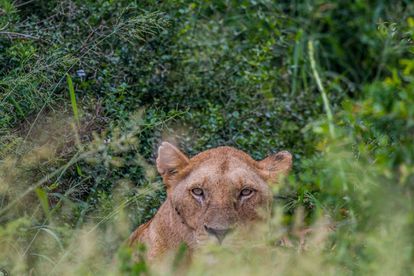 Watch below an incredible sighting of a male lion with half a nose spotted while on safari in the Kruger National Park. Photo: Hluhluwe Game Reserve / Facebook

Watch below an incredible sighting of a male lion with half a nose spotted while on safari in the Kruger National Park. Photo: Hluhluwe Game Reserve / Facebook

A pride of lions that were allegedly terrorising two communities have been ‘destroyed’ by Ezemvelo KwaZulu-Natal Wildlife.

It’s been reported that the locals cut down a fence and staged a sit-in inside the Hluhluwe Imfolozi Park. They allegedly threatened to hunt and kill the lions themselves if nothing was done.

In a statement released on Sunday, 17 July, Ezemvelo KZN Wildlife stated that it took two representatives of the community from Nqulwane sand Okhukho on a verification flight on Friday to show them the carcasses of six lions.

The lions are believed to have eaten approximately six cows and the communities have been living in fear of their lives. Community members reportedly staged a number of protests for their voices to be heard.

Locals reportedly cut down the fence and occupied the land at Hluhluwe Imfolozi Park until MEC for Economic Development, Tourism and Environmental affairs Ravi Pillay made an effort to address and resolve their concerns by deciding to hunt and kill the lions.

According to the statement, when the lions came into contact with people the animals walked straight toward them. This is reportedly not normal behaviour for such encounters as lions generally run away.

On Tuesday, 12 July, the community met with Pillay where he resolved to do the following:

Lucky Ngqulunga and Similo Khanyile are the two members of the Nqulawane and Okhukho communities who were flown over the area where the six lions were ‘destroyed’ on Friday, 15 July.

Ezemvelo KwaZulu-Natal Wildlife revealed that since today, 94 people have been employed as fence liners to date. Another meeting between locals and the department is expected to discuss the employment of more locals. The meeting is set for Tuesday, 19 July, reports TimeLIVE.