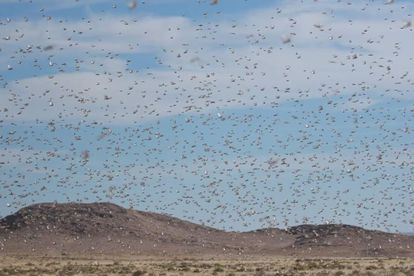 The enormous swarms of brown locusts causing destruction across the Northern, Eastern, and Western Cape urgently need to be eradicated.

WHY IS THERE URGENT ACTION NEEDED?

President of Agri Northern Cape, Nicol Jansen, reportedly said the swarms are still in the pedestrian stage but would start taking flight within the next four or five days, making the problem a hundred times worse.

He told Farmer’s Weekly that aerial combating is currently the most effective option for managing the swarms.

IF SWARMS REACH FLIGHT STAGE IT COULD BE DISASTROUS

According to Jansen, if the swarms reach flight stage, it would mean a disaster of massive proportions, with enormous costs to the agricultural sector.

“It is therefore of vital importance that we prevent the swarms from reaching the irrigated crop production areas along the Orange River and in the Free State and North West,” Jansen added.

And there is more bad news…

POSSIBILITY THAT THIRD-GENERATION LOCUST COULD HATCH

Dr Gerhard Verdoorn, Croplife South Africa’s operations and stewardship manager, warned that there was a strong possibility that the third generation of locusts could hatch by May.

He explained that the warm weather, excellent veld regrowth, and humid conditions were ideal for developing the third generation of insects.

WHAT PROVINCES ARE AFFECTED?

The swarms stretched from as far afield as Jansenville in the Eastern Cape to Merweville in the Western Cape. In the Northern Cape, the areas of Victoria West, Marydale, Kleinbegin, Vosburg, and Richmond, amongst others, were worst affected by the locusts.

Earlier this year, former Generations actor Mangaliso Ngema has called on the government’s intervention after thousands of locusts attacked him in the Northern Cape.

The actor shared several videos of locusts blocking his way and is heard complaining about them getting inside his car.

Other motorists also shared their videos that looked like something out of a horror movie.