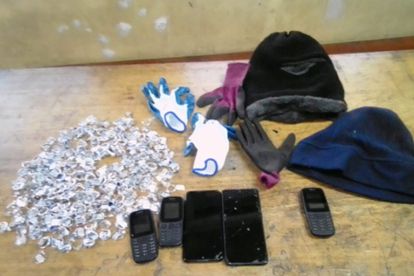 Four suspects, aged between 29 and 39, have been arrested after they were found with items worth R100 000 shortly after jewellery store employees in a mall in Ekurhuleni was robbed at gunpoint on Wednesday 18 August 2021.

According to SAPS Captain Mavela Masondo, police are searching for about six more armed suspects who managed to escape with some of the stolen jewellery.

Masondo said that approximately 10 armed suspects stormed into a jewellery store at a shopping mall in Ekurhuleni and held up employees and patrons at gunpoint, before taking expensive jewellery and cellphones.

It is alleged that the suspects also fired some shots as they were leaving the mall.

A message was subsequently sent to police officers on the ground to be on the lookout for suspects driving in three cars; a Ford Figo, a silver VW Polo and a white Toyota Fortuner.

“Police officers, who were patrolling around Bertrams in Johannesburg, noticed men who looked suspicious and accosted them. They were found with two sets of hand gloves, a balaclava, cellphones and jewellery to the estimated value of R100 000,” said Masondo.

Police from Gauteng Serious and Violent Crimes – Murder and Robbery Unit have launched a manhunt for more suspects that are still on the run and are appealing to anyone who might have information that can assist in apprehending the suspects to call the nearest police station or Crime Stop on 08600 10111.

Information can also be given anonymously via MySAPS App that can be downloaded from any smartphone.

Apart from the jewellery store robbery in Ekurhuleni, a man in Durban, depositing cash at an ATM, recently managed to fend off robbers. Yes, that’s right. The man actually responded with gunfire and there’s a video too. See below: