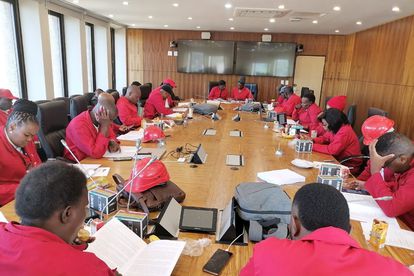 The EFF in Johannesburg in a caucus meeting ahead of a council meeting this year. PHOTO: Twitter/@EffJhbRegion

The EFF in Johannesburg in a caucus meeting ahead of a council meeting this year. PHOTO: Twitter/@EffJhbRegion

The violence and assault which took place at the City of Johannesburg Council meeting have left Mayor Mpho Phalatse furious. This is because the EFF has been using their hard hats, which form part of their daily uniform, as weapons to attack councillors.

But it seems the red-berets were not happy with how Speaker Vasco Da Gama conducted the meeting.

The group of red were seen in a video ascending to the Speaker’s seat, before arms, slaps and fists started flying.

A council official was assaulted in the chambers, which angered the mayor as the country is observing women’s month – and this year, violence against women is highlighted.

“It is with extreme sadness and anger that we witnessed a woman EFF Councillor physically assault another woman – a Council official,” Phalatse said.

She said two other women Councillors were also assaulted.

“The presence of hard hats, and their use as weapons in Council, is something we must relook for the safety of all Councillors, officials and residents who attend sittings.”

But this is not the first time that violent scenes played out in the sitting. This is despite criminal charges being previously laid with the police.

“I recently followed up on the investigation and there has been little to no progress. The lack of appropriate action from law enforcement authorities fuels these violent acts in Council. They reinforce the reality that gender-based violence and criminality in society are not treated urgently.”

The mayor will be engaging with Da Gama and leaders of political parties in the Johannesburg council. This is to ensure they collectively condemn violence against women. This will include talks on all those involved in instigating the violence in Thursday’s council meeting to ensure there is accountability in terms of the Council rules.

“Women face the brunt of society’s ills, it is therefore deeply upsetting that the City Council, which has the responsibility to legislate, inter alia, solutions that protect vulnerable groups, like women, would perpetuate violence against women – for all the world to see.”