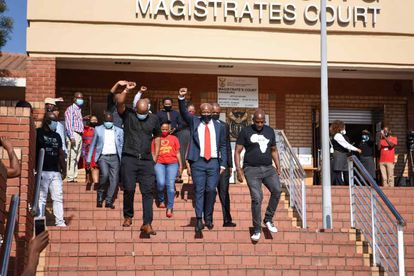 The Economic Freedom Fighters (EFF) is standing firm behind its members, leader Julius Malema and Member of Parliament (MP) Mbuyiseni Ndlozi, as the duo’s assault trial enters its second day in the Randburg Magistrate’s Court on Thursday, October 29, 2020.

“We are not cowards, we are not shaken,” the party said on Twitter.

Malema and Ndlozi are accused of assaulting Johannes Venter, a police colonel in April 2018, during the funeral of struggle stalwart Winnie Madikizela-Mandela.

EFF supporters flooded the court precinct, singing struggle songs as a show of solidarity to their leadership.

Venter recalls alleged assault: ‘No white man will stop me’

Venter alleges the pair attacked him for refusing to grant them entry into the Fourways Memorial Park Cemetery in Johannesburg, where Madikizela-Mandela was buried. He was in charge of access control on that day.

He took the stand on the first day of the trial and gave his account of what transpired. Venter told the court Malema and Ndlozi pushed him a number of times after he told them their vehicle was not allowed inside the graveyard as it did not have the necessary permit.

“Whilst I was standing in front of the vehicle, I was then pushed from the right hand side. I cannot say who had pushed me. As I turned around and looked back I saw Mr Malema jumping out the vehicle and said ‘no white man will stop me’,”

At the funeral, Venter said only specific vehicles were allowed into the cemetery, including those of family. He said Malema’s car was not one of them because he didn’t see a permit.

“The vehicle was not part of the convoy. It was stopped. There was no visible permit. Even if there was, I would have still stopped it,” Venter said.

Hodes further made reference to a statement made by Zindzi Mandela, Winnie’s daughter, in which she said Malema had been raised by her mother and was regarded as family. The defence accused Venter of altering his version of events.

“You are making things up as you go along to help your case,” Hodes said.