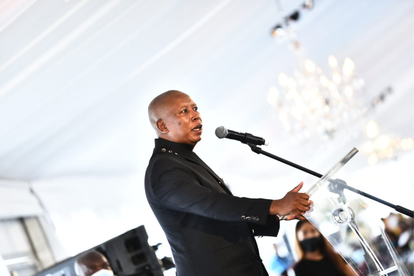 The Economic Freedom Fighters have wished the nation a blessed New Year in an official party statement issued to mark the occasion.

In the statement, the EFF acknowledged the immense difficulties South Africa has faced during the past year amid a continued battle against COVID-19.

“The EFF wishes all African people a happy and safe cross-over into the New Year. It is by grace that many have made it thus far, in the face of the tremendous challenges confronting us, from rampant unemployment and the COVID-19 pandemic.”

The EFF says that, whilst 2021 served as another year of ‘committed struggle’ to its agenda, it remains proud of its continued success. The party expressed pride in its leadership and ground forces for ensuring the EFF continued this struggle.

“The growth of the EFF remains admirable, despite doomsayers and those who have made it their task to misrepresent what we stand for. In this year, the EFF opened its Headquarters, Winnie Mandela House, a show of strength and stability that detractors could not stomach.”

Growth comes against backdrop of a ‘parasitic government’

Naturally, the EFF had nothing pleasant to say about the current leadership of South Africa. The party lauded the ‘brave efforts’ of its members that saw the ANC securing less than 50% of voter support during the recent elections.

“Our growth however remains on the backdrop of the continued mismanagement of the state by a parasitic government, the abject poverty of our people and apparent re-colonisation of our country at the level of economic and medical policy.”

Whilst traditionally this holiday is marked with New Year’s resolutions, the EFF says that the current government hinders any hopes of personal growth for South African citizens.

“As each year goes by, our people are trapped in making resolutions aimed at personal development. These resolutions are stifled by an incompetent and anti-developmental government, whose interests in profit supersede the interests of the people.”

In conclusion, the EFF summed up its views on why the government would seek to avoid empowering citizens.

“An educated nation is a threat to those who are corrupt, and for this reason they will again brutalise those who demand access to education. This is the bleak reality of the New Year.”