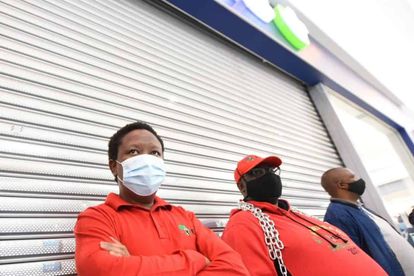 As the Economic Freedom Fighters (EFF) continue their siege on Clicks outlets around the country, another store has been confirmed to have been the victim of a petrol bombing.

The Clicks store at the Cycad Shopping Centre in Polokwane, Limpopo, was petrol bombed at some stage on Monday morning, with police investigating the incident that bares similarities to an act of arson committed at a Clicks store in Witbank, Mpumalanga, on the same day.

This follows EFF leader Julius Malema’s pledge to visit “all Clicks outlets in Polokwane”, having started with the outlet located in the Mall of the North at 9:00 on Monday 7 September.

“We can confirm that a case of malicious damage to property and attempted arson has been opened,” he said, adding that nobody has been arrested yet.

He said that the investigation into the attack is ongoing, but said that the incident took place prior to 10:00 when SAPS deployed more officers to various Clicks outlets in the city.

“We don’t know exactly what time it happened,” he conceded. “We have since deployed more SAPS officers but by the time we arrived the incident had already happened.

He said that the incident is likely to have taken place prior to Malema having visited the outlet on his City-wide protest tour.

“It could be linked but until we make arrests we cannot make a link,” said Mojapelo, who added that the extent of the damage is also still being assessed.

The EFF’s Provincial Chairperson, Jossey Buthane, said that he is aware of the incident and said that while he doesn’t condone the incident, he is glad that EFF supporters are accepting the call to action.

“We do not condone the petrol-bombing incident at the Clicks store in the Cycad Shopping Centre, however, we are thankful that it was done.”

EFF vow to ‘close down any clicks store’

Malema addressed his supporters at a store in Polokwane earlier on Monday, and said that the action taking place around the country would continue until the EFF’s demands are met.

“If any store of Clicks is open, inform the EFF and we will come and close it,” he said. “We are tired of white arrogance.”

He urged his supporters to be prepared to “respond quickly” and move to shutdown Clicks stores that try and open to the public.

“Today is the beginning of a rolling action against Clicks,” he said. “Every day, fighters, you must be combat ready. If there is a store open, you must respond quickly and we will go and shut down those stores.”

EFF ‘don’t need permission from anyone’ to protest

Malema also called for security guards and the police to stay out of their way as they engage in what he considers to be “peaceful protest”.

“Black security guards, respect yourselves. Stop provoking people who are not fighting against you. Black policemen, start respecting yourself.”

“When you are called, you should ask the question ‘is there any crime being committed?’ Peaceful protest is not a crime,” he said. It is protected by the constitution. We have a right to protest and we require nobody’s permission.”

He said that his supporters require no permit to engage in protest, and that police should respect the democratic process he says is being observed.

“We are here, without a policeman’s permission. This is not Apartheid time, where police thought they were more powerful than the people. Police must learn to respect people.”