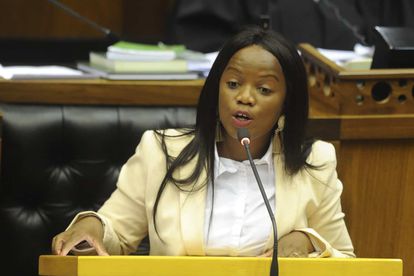 “Wow you truly are the trashiest of trash. A bottom feeder. She has far more intelligence, class & decency than you will ever have. She has done for SA than you ever will,” Van Damme said in part.

The DA MP was far from done and called Shivambu a patriarchal fool who was used to bullying people.

“You are so used to bullying harassing people and you think that makes you a Big Man. You have no shame speaking to a woman like that,” she went on.

This time, the insults were spurred by a tweet, in which Madonsela essentially accused the EFF’s leaders of camouflaging as supporters of the working class and black women.

Shivambu: Madonsela ‘a fraud with an arranged questionable marriage’

Naturally, Shivambu, never one to take such jabs lying down, responded, labelling Madonsela as a fraud who was impulsively awarded her tenure at Stellenbosch University. He also took shots at the former public protector’s personal life, calling her relationship with PR boss Dick Foxton “questionable”. It’s not clear whether the pair have exchanged vows, however Madonsela revealed in a television interview in 2018 that they were engaged.

Madonsela has been vocal about Clicks’ controversial advert, which led the EFF to embark on a shutdown of the retailer’s stores. As many as 400 outlets had to close doors after some incidents turned violent, with protestors vandalising property.

Shivambu isn’t the first EFF leader to lash out at the former public protector as Mbuyiseni Ndlozi also took aim at her, telling her to “find the nearest hell”.