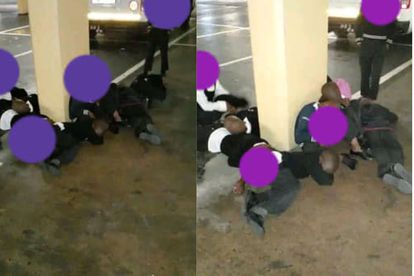 According to the Eastern Cape Vacancies with Asanda, a Facebook platform that shares the latest jobs in the province, these learners were on tour at the Wild Coast Sun with their educators when they were allegedly left unattended.

PRINCIPAL AND TEACHERS GONE FOR A NICE TIME

“The school kids you’re see in these pictures are from Ntabankulu. The kids were/ are on a tour at Wildcoast Sun with their teachers and principal.
Now the situation is that the taxi drivers, teachers and principal left these kids in this cold parking lot and went to braai in some beach last night,” the platform posted.

It is reported that they left at 18:00 in the afternoon and came back at 2am the following morning (this morning), which simply means the kids slept in this parking lot.

It is further reported that the teachers, taxi drivers and Principal, believed to be either from Mathole J.S.S or Tolweni J.S.S (judging by the uniforms), all left in one Taxi and locked the other taxis.

These disturbing photographs have caused an uproar on social media with many users accusing the staff of negligence.

Amanda Mbalo said: “What kind of a nonsense excursion is that. They must kiss their jobs goodbye shame. How did the District office approve an overnight excursion with no clear indication of what will the children be doing at night? For me, it’s the Principal, staff in attendance and the District office who must account for this matter. This is soo disheartening our children outside alone when they went on tour with people who were supposed to be looking out for them.”

“This needs to go viral guys, it needs to be escalated to the department of Education. That was a very selfish move.”

Yolandi Carelse said: They used the kids’ tour as an escape for them to get out and do their own thing. SGB and Education Department must get rid of the principal. It was a very irresponsible act from his side.

The Eastern Cape Department of Education is yet to release a statement on this matter.