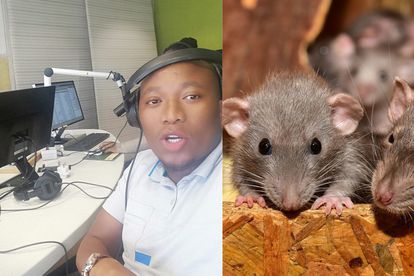 An Eastern Cape Broadcaster landed himself in hot water after he was charged for allegedly torturing rats and filming the disturbing act.

The HeraldLive reports that the Eastern Cape Broadcaster, known as Mkhokheli Bandla appeared in court this week facing charges of animal cruelty.

According to the publication, a Gqeberha man who allegedly tortured three rats by immobilising them on a glue trap and then repeatedly burning them with a lighter appeared in the Motherwell Magistrate’s Court on Tuesday.

It is further reported that the Journalist Mkhokheli Bandla also allegedly filmed the acts before posting the video on social media.
However, the broadcaster denied this in court. Although animal cruelty is taken seriously in the country, followers of the broadcaster turned the entire incident into a joke – mocking the Bandla by imagining him getting a criminal record for crippling rats.

According to Animal Save Movement, ‘Glue traps are, unbelievably, a legal method of ‘pest’ control.

In a statement, the organisation elaborates further:

The government justifies it by stating that the user of such traps has a legal responsibility to reduce suffering by checking the traps frequently for any animals, and ‘dispatching’ of them humanely.

These traps are incredibly cruel. Mice, rats, voles, shrews, lizards, insects, and birds (the list goes on!) can become stuck to the glue, immobilising them. Animals will attempt to escape, often tearing their own skin or chewing their own limbs in the process. If they can not move at all, they will become exhausted trying.

“Traps that are left for long periods, which they often are, will leave animals to dehydrate and starve to death. This is NOT ok!”

No matter your view on mice and rats, this can not continue! I have never believed in the word ‘vermin’. We share this planet with so many animals. We have taken up most of their homes, and believe we own the land above all of them. We do not. We share this world with them. This is barbaric and needs to be banned worldwide.