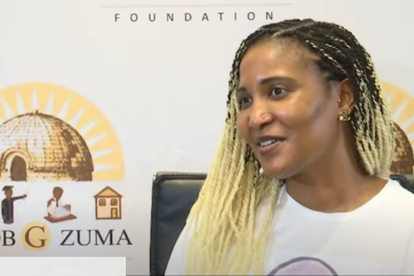 The media was granted a rare glimpse of Duduzile Sambudla-Zuma in the flesh on Friday, after she attended a press conference on behalf of the Jacob Zuma Foundation. The group had convened a briefing to reveal more details about next Thursday’s prayer event for Msholozi – but the July Riots quickly became a talking point.

Duduzile was singled out by one reporter, who wanted to get her view on the deadly unrest that claimed hundreds of lives just three months ago. Zuma’s daughter is accused of inciting the riots via her Twitter page, but has not been arrested for committing any crimes. Before she could answer, the media-savvy Mzwanele Manyi jumped in.

Acting as a spokesperson for the Zuma family, Manyi extinguished a possible political fire in double-quick time. He interrupted Duduzile and the journalist, and categorically stated that the issue ‘would not be discussed at all’:

“What won’t happen, is that this turns into a presser about her. Her role was to welcome you, but she won’t be saying anything more, she will be just smiling. She won’t answer any of your questions, it won’t happen.” | Mzwanele Manyi

#JacobZuma When questioned about allegations that she (Duduzile Zuma) was part of the people who “fanned the flames” for the July unrests. Manyi interjects saying she’s not here to answer questions.

But in the end she responds by saying “we see you”. pic.twitter.com/dZSdEobt2K

Duduzile did, at least, get to give one line to the media – and simply said ‘we see you’; a reference to the Tweets she made at the height of the public violence, acknowledging those who were demonstrating ‘in the name of Jacob Zuma’. At the very end of the press conference, Zuma’s daughter also expressed her relief at having uBaba back in Nkandla:

“We are happy to have him home, he was taken from us illegally, but we are happy he’s back.”

On Thursday 14 October, the Jacob Zuma Foundation will be hosting a Welcome Prayer for the Former President in KZN. Faith-based and Religious Organisations, including all political parties, are invited to the event, which will take place near the Moses Mabhida Stadium. Up to 750 people can attend indoors, with 2 000 allowed outdoors.