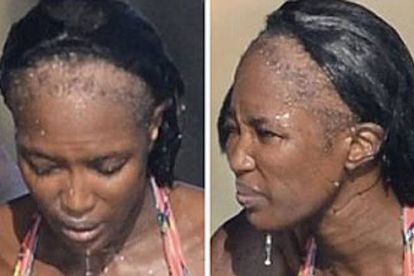 Duduzile Zuma is at it again! Former President Jacob Zuma’s daughter took a jab at super model Naomi Campbell’s receding hairline who penned a letter to former president on the recent unrest in parts of KwaZulu-Natal and Gauteng.

In her letter, the 51-year-old asked Zuma to act like a leader and take responsibility for the recent unrest. She further said each day Zuma defies the courts and stoke division he takes a step backwards from Madiba’s vision for South Africa to prosper and for their not only be equitable political justice but also economic justice.

In the lengthy open letter she penned on Instagram the model said ”This isn’t the South Africa I remember and that millions of South Africans fought for. The South Africa that overcame Apartheid , showed the world that change was possible. Led the battle in the fight against HIV/AIDS and has weathered countless efforts to undermine the new South Africa.”

“I have watched how over the last few years you have protested your innocence at the allegations tabled against you of corruption and allowing mass State Capture. I have seen you go out of your way to avoid having to deal with these matters in court and avoid a Commission setup to investigate State Capture,” Campbell wrote

It looks like Campbell’s criticism of Zuma did not sit well with daughter Duduzile who instead took to Twitter to share the British model’s pictures of her receding hairline. “Yo, Naomi Campbell Where You At Girl!? Here Is Some Free Advice: When Foundations Ask You To Write Nonsense, Especially About Politics, You Should Politely Decline Because They Will Put You In Hairy Situations…Can We Talk?” she wrote.

The pictures of the model’s receding hairline were taken in 2012 when she was on holiday in Ibiza.

Here are other reactions to the open letter: