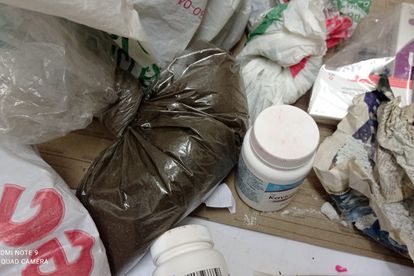 Police seized drugs suspected to be heroin and prescription medication during a drug raid in Pietermaritzburg on Wednesday night. Photograph: KZN SAPS

Police seized drugs suspected to be heroin and prescription medication during a drug raid in Pietermaritzburg on Wednesday night. Photograph: KZN SAPS

KwaZulu-Natal regional spokesperson Captain Nqobile Gwala said police from the Prestbury K9 Unit had conducted an intelligence driven operation that led to the arrest and recovery of the drugs.

“The team went to a premises situated at Cowens Crescent in Prestbury after information about drugs being processed was received,” Gala said.

“A search was conducted inside the house and the police found 17 packets of drugs suspected to be heroin and several bottles of prescribed medication,” Gwala said.

She said police also seized a scale and a razor blade during the raid of the premises.

“Two TV sets, a laptop and sound system suspected to be stolen were found at the premises,” Gwala added.

Police also seized R8140,05 in cash from the premises, which is suspected to be some of the proceeds of the drug dealing operation.

She said the suspects were expected to appear in the Pietermaritzburg Magistrates’ Court today.