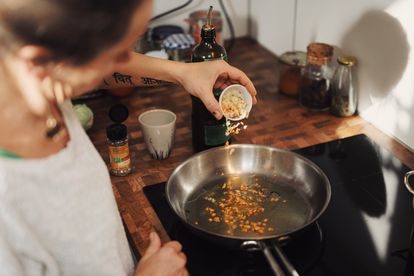 A team of researchers found that cooking might give you brain damage Photo: Conscious Design / Unsplash

A team of researchers found that cooking might give you brain damage Photo: Conscious Design / Unsplash

Professor Torkmahalleh and his colleagues investigated the brain activity of individuals before, during, and after exposure to ultrafine particles from cooking.

Ultrafine particles, which can be found in cooking fumes, are incredibly small and able to penetrate the human body. Study participants were exposed to these particles as the Professor and his teamed fried a chicken drumstick on a gas stove.

Their brain activity was recorded using an electroencephalograph (EEG) before cooking, at the end of cooking, and 30 minutes after cooking. Ultrafine particle concentrations in the air were constantly monitored and reached peak levels during frying. Shockingly, they found that beta waves of the brain decreased during exposure to the ultrafine particles, similar to people with neurodegenerative diseases!

Moreover, the theta/beta wave ratio of the brain increased during and after exposure, similar to that observed in early-stage Alzheimer’s disease. Brain activity for most participants returned to normal within 30 minutes.

“Brain responses after long-term exposure may deteriorate with time and, after sufficient long-term exposure, never revert to pre-exposure levels leading to a similar status to neurodegenerative disease. This is a novel hypothesis for our current and future research studies. This suggests that people chronically exposed to cooking aerosol might progress towards Alzheimer’s.”

HOW TO PREVENT THIS

The changes to brain wave patterns during and shortly after exposure could be due to the ultrafine particles from the fumes reaching the brain through the nose.

The researchers suggest using proper ventilation during cooking to reduce the potential risk of neurodegenerative disease.

In short, cooking might be a dangerous activity after all… but if good ventilation makes it safer, then maybe the trick is just to braai or make a no cook recipe!