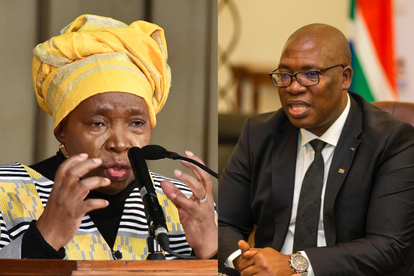 Lesufi was elected to the position on Thursday, 6 October 2022, during a special sitting of the provincial legislature. Lesufi’s rise to the premiership follows David Makhura’s resignation on Tuesday. Makhura is leaving Gauteng politics after 22 years – eight of them being as premier.

He was elected the African National Congress (ANC) Chairperson in Gauteng during the 14th provincial elective conference.

Dr Nkosazana Dlamini-Zuma has lauded David Makhura for his service to Gauteng and lauded the smooth transition of power to Panyaza Lesufi, saying in part: “After eight years of dedication, selfless leadership and commitment to the development of our communities, Mr David Makhura decided to hand over the baton to the new leadership. This bold and courageous move by the former Premier will go a long way in ensuring continued service delivery to our people. This well-executed handover of power to the new leadership is exemplary and should inspire and propel our democracy going forward.”

Dlamini-Zuma said the new leadership under Lesufi will surely be able to continue the good work done in this province under the stewardship of Makhura.

“We need to ensure improved governance, oversight, accountability and institutional stability towards effective and efficient functioning municipalities across the province which meet the aspirations of the population we serve. We wish Premier Lesufi well in his new role and look forward to working and supporting him to institutionalise and implement the District Development Model (DDM) in an effort to ensure that municipalities are supported to deliver quality services to the people.”

Dlamini-Zuma has wished Makhura well on his future endeavours.